The advent of Rayman, the flying member, caught the eye in the Origins section, which brought together the audience of platform games between the old-time lover of Mushtaq and the fans of the high-tech touch of the game. The march of the game in the world of 2D will not stop halfway and finally we get the new part Rayman Legends Adds a lot to the experience this time.
Who tried the game or would like it to be sure it does not show any story except a simple event to build the hours of running and long jump waiting for you, Rayman and his friends come back again to the ruins of the blue Teensies creatures, which by the way have a very important role in opening the stages within the game, A list of beautiful and simple stages, in fact stages are palettes of each of you to a particular world, each world includes many paintings that represent the stages, so you will not go any time and browse the list or otherwise, but you have to move in person to go to the panel that you want to enter, And even download the game as in the previous section can You can control your personality and do your moves during the stage, so Rayman Legends does not give you any time off but if you prefer to take a break yourself. 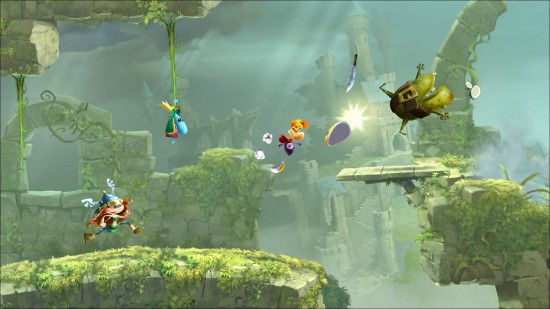 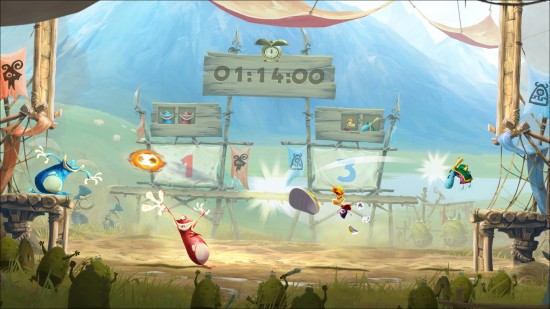 The gameplay is simple, easy and limited at the same time. The buttons that will be used are few, hit, jump and run, and put it in front of a classic platform game. The control stays the same but you do not expect the same with the stages and environments because they put you in the face of different enemies and different challenges The control remains the same until you change the many characters that open up the yellow creatures, but the environments and the clever way they design make the control style change. For example, they swing in the ropes, dive or move from platform to platform, Or use the wind to Liq, all with the attention of the enemies and traps and other what makes a great challenge but it is acceptable which is superior in which this part of the previous segment, which largely suffered from repetition and difficulty unbalanced.

Well, maybe he talked about the world and the environments and I did not talk about its design and graphics in the game, that's something deliberate because the graphics alone deserve to be mentioned separately from the rest of Rayman's basics or any other platform game, the game is spectacularly graphic, The jumps, for example, are not the same as you normally move, or run through the wall so you have to make sure that you are doing the right thing in the right way, especially that some stages require you Full focus and time set. 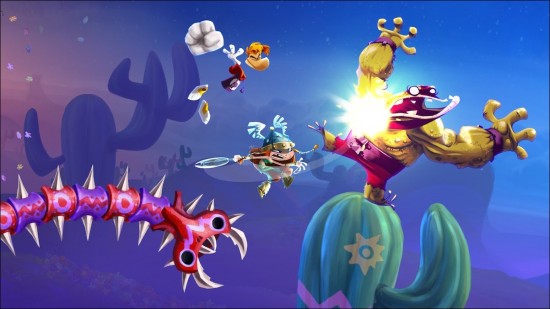 The stages in the game get harder as you progress, simple, easy, medium and hard, but the difficulty is very reasonable and personally I have not had any difficulty in the main stages, collecting everything and searching in secret places adds an additional challenge especially for those looking for access For the 700 Teensies number that allows you to open almost everything in the game, the Lums on its part make you get the Caoos raise your level in the game and open up to you additional challenges you share with friends, and that by reaching a certain number you get a surprise card reveal her back to get a gift, Anything, from a certain number of lums or pauses New from Origins World The world of the previous part Yes, the game contains rewritten stages of the previous section, which makes the content of the game huge, but very huge, as if that is not enough 28 new stage of the invasion stages will open to you progress in the game, You have to save three blue creatures in less than sixty seconds.

The game has some other simple additions, like the Kung Foot game like a mini football game where you hit the ball to enter the goal. The game is easy, simple and funny when you play with friends or family, and I remember the same absence of team play over the net. Difficult to get additional players only hard, the previous part was fun with the presence of other people and this part also does not contravene the rule, the game puts you in front of a very large variety, so expect to face some interesting leaders, beautiful is the accompanying effects and movements that make any similar game bend T The other thing that was for me a shell at my point of admiration is the rhythmic stages, the stages that I personally took to repeat more than once. These stages in particular offer exceptional pleasure.

I'm sure I've forgotten something about the game, the dazzle was parallel to the decent hours of the game, although I do not hide a slight annoyance from the design of some stages, but the rest covers everything without a doubt, comes the music accompanying the game to add additional points, Rhythm The game contains music that is amazingly varied, often ambiguous, sometimes with the touch of the Middle Ages and sometimes characterized by its cartoon character, all of which help to change the experience.


Conclusion
----------------
Rayman Legends not only surpassed the previous level, which was excellent without a doubt, but aimed at a higher goal and developed a lot, a game of high-class platforms combines elegant design and fun games and funny moments, with huge content of the game of this type and re-playability to collect everything, Legends is not Just adding to the first part, but a new part with all the meaning of the word.