The shmups were for decades prevalent in the Japanese arcade scene. The cult status they met in Japan over decades was unparalleled in the rest of the world, despite the multiple conversions to consoles sent to the West, an attempt to make known to the world a very specific genre, height gained ramifications and found in the "bullet hell" a segment marked by an increment of difficulty. If today arcades are not so dominant and are even declining, the truth is that these systems have not disappeared and in spite of news coming in fewer numbers, the traditional games rooms should not end so soon.

The same is true of shmups, whose production is now reduced but not relegated to oblivion. Of the few such heavyweights still active, it is impossible to ignore the recent work of Moss in Raiden V. Published in 2016 in Japan and then worldwide for the Xbox One, this year is the turn of PlayStation 4 and PC / Steam receive this precious. After the release in Japan in September, PQube is due to launch Raiden V in this version that we now analyze by the name Director's Cut in Europe.

The R-Type, Gradius, Blazing Star, and many others are particularly welcome, and the return of Raiden, one of the historical series with arcades, is well-received, and is worth to fans of the genre some of the best memories. Despite the differences separating this fifth iteration of the first titles, it is fair to say that the legacy remains, as well as the body of the series and much of the gameplay. The difference is that now is a game designed for consoles and not to be played in the halls, which is perceived by replacing traditional lives (obtained by inserting coins that guaranteed additional credits) by a shield that resists damage. When the energy of the shield ends the machine disintegrates and the game over happens. They can continue but the punctuation counter goes into "reset" mode.

The vulcan features three combinations of shots.
To begin with they will have to choose a level of difficulty, of 6, being that the most experienced ones should start at least in the normal one and rise as they feel comfortable in the offensive maneuvers. There are three ships to select from, all with varying strengths in terms of firepower, speed, and weaponry. By default we have the most balanced or base model, but then there are a number of advantages to be drawn from the others if we take advantage of faster gameplay or based on an additional number of ammunition.

Lastly, the choice of weapons is no less important, and here we are given a very significant margin of choice, which amounts to a strategic weight. There are three weapons: the vulcan, laser and plasma. It is not possible to change weapons while fighting, only change weapons if they grab a crystal that is regularly released by hit enemies. It is optional to pick up this crystal and if it does not fire for a while, it changes color temporarily, allowing you to select certain equipment (red for the vulcan, blue for the laser and pink for the plasma).

This equipment corresponds to three different models of firepower, which in practice is equivalent to nine versions. For example, in the laser option they can choose to concentrate damage only on an enemy, with a more powerful ray, opt for another version that releases (after a loading time) a wide block, and a final version that shoots a crystal forward which spreads the rays like a crystal under a luminous focus. This selection is made initially, and may even choose the weapon with which they intend to start combat, but its effects are important in the long run.

There is enough variety in this system to create faster firepower and neutralize threats. The best part of this is that these weapons evolve as we bust with the enemy ships in a row. More gems operate a necessary change to change the equipment and level up, through a ranking capable of compressing 10 levels. If you hit enemies consistently, without suffering damage or granting large intervals, a meter records this increase. At one point, the level rises and the weapon improves. All weapons are capable of evolution up to level 10, and it is advisable to change equipment regularly.

Otherwise Raiden gameplay remains. Each hit enemy releases a medal, which increases the score, but this score can be increased if they collect the medals. In some cases, they may bust more than 10 opposing nets at the same time, thus releasing 10 medals, and it is convenient to take a surgical break on the shot so that the medals are attracted to your ship automatically. And then they pull the trigger again. Through this model the gameplay is very fast and frenetic, with lots of objects on the screen at the same time, without the slightest slowdown.

The work of Moss is remarkable in terms of performance, achieving a very smooth experience and without the slightest slowing or breaking of the frame rate. What happens is that the 3D scenarios are not as elaborate or flashy as in the first games of the series, whose 2D is very beautiful and a delight for the eyes. In this case, it is the enemy machines, tanks and military aircraft, especially the bosses who look better and in a very diverse set. The gameplay thus remains one of the highlights of this fifth edition and it is for this that we continue. 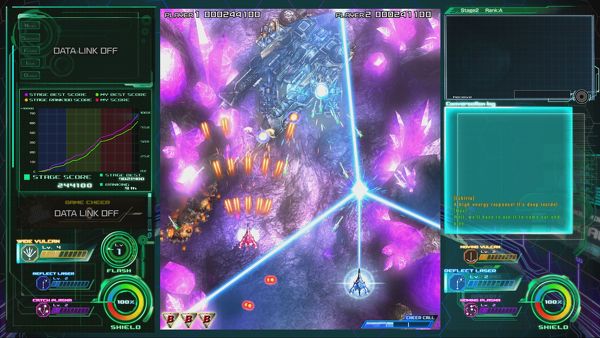 There is a gallery full of game art, but fans will be focused on getting the score. Scorer is a Japanese slang word meaning top shmup.
As we said before, there are no credits or lives, just a shield that is losing energy as the ship is struck. After this energy happens the "gameover". In times of greatest distress, especially boss fights, they can launch bombs, a good method to temporarily wipe out your threat from any threat, but the score is not so great at the end of the level(points are given if they reach the end with pumps in stock). Of course there are small bonuses that increase the score, since small icons to gravitate in certain zones, but have attention to the enemy bullets.

The other alternative to the bombs is the "cheer" system, a novelty in Raiden V, which remains naturally in Director's Cut. The system is processed through a reading carried out by the servers that follow the progression of the players. When you start the game there is an online connection. Thus, players who fulfill certain goals, reaching points in a predetermined number, send one cheer to another, which in turn sees their respective support bar gain more energy. When it is close to full (from 1/3) they can activate their power and put on the map an additional spaceship capable of delivering a burst of bullets and fireworks over rivals. In the background these special attacks are motivated by users who contributed their best gameplay. At the end of the match you can see which players have sent you cheers and also to whom they have had the opportunity to send. This mechanism operates automatically. In practice it is a good addition and confers a special attack for the moments of greater difficulty, enhanced the score.

Another note for the game areas, a total of eight, with some optional and many boss fights. There are several settings for the same level (from A to D), according to some criteria such as neutralized enemies, time spent, etc. In the background are alternative ways to reach the final, highlighting some additional levels of this Director's Cut. The game can be enjoyed through two modes: story mode and "boss mission". While the former is inscribed in the passage through the various levels, in the second option they face only the heaviest rivals, counting towards a leadership chart. These exist for both online and locally.


The worst part of the story goes to the few cut-scenes. At the beginning this is presented in the form and a dialogue about an art image, which is an unworthy presentation and even keeps us from following the events. During the battles there is a box that shows in text the conversations that we hear in direct, being that the addition of the voices is an exclusive of this Director's Cut. Lastly, it is impossible not to mention the soundtrack, absolutely phenomenal and another of the highlights of this "shmup". In this chapter it took a great change, after the exchange of Go Sato by Yoshimi Kudo (Deathsmiles II, Caladrius and Muramasa: The Demon Blade), we are introduced to a hard rock rhythm with guitar riffs and piano keys, a combination always present and at the same time able to perfectly emphasize the moments of greater intensity.

In short, Raiden V Director's Cut is a thoroughly recommended experience for fans of shmups. Their releases are increasingly sparse, but when they arrive and come from Japanese companies such as Moss (more imbued with the spirit of the Raiden series), they rarely disappoint. The knowledge is still there and the truth is that although there is a lack of better management of the organization of the story, essentially what is the gameplay, do not disappoint. Yes, it is a game somewhat different from the originals and there may be some who feel this a deviation, but there is logic in this evolution, in this forward and in this return of a genre that remains in this Director's Cut as attractive as before. When we engage in a score attack for the best score, we quickly realize how current production reveals a care in development. The presentation is very effective, with detailed information on the evolution, although it does not contemplate as many options as it is usual to happen in the works of M2. However, Raiden V is up to the best of the series. Come on over.