Prototype was first announced in the summer of 2007 and described as a "competing Infamous that will come out on multiple platforms". It was announced as atmospheric title in the sandbox style in New York, where players can slaughter their enemies in unimaginably brutal ways. The gamers were somewhat skeptical, they said that in the trailers the game looks "too good to be true" and that it will not be too much to wonder if you drop it.

Alex Mercer is a good-looking young man from New York, known for his extremely elegant fashion combinations, working for the GENTEK corporation. The GENTEK corporation is in fact a very evil corporation that secretly develops so-called " Blacklight virus, based on the virus that was released in Idaho in 1969, designed to change human DNA. Fashion-minded Alex optimistically tries to steal the virus without hesitation and decay, the virus infects his body. The guy soon wakes up in the morgue  and finds that he has received a multitude of super powers because of the virus. There is no need for a great power of conclusion to understand that the first few lines of reviews are about the main hero prototype, not my neighbor from Croatia who lives on the first floor. 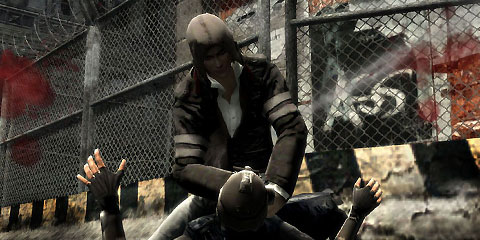 To begin with, it is necessary to say that Prototype did not fail in any case. The story may have been a bit poorly presented, but it serves a very good quality of ambition in the atmosphere, and i guarantee that it will not take long to fall in love with zombie-infected New York City. In the world of zombies infected in New York, you can climb up the buildings with high speed, float above the roofs of the house, crush the helicopters with one blow and brutally chop all that's on your way - from innocent passers-by to soldiers that open fire on our "anti" -hero.

Yes, Alex has countless powers and is not afraid to use them, which makes him one of the most entertaining characters i have been ever controlling. New York (or Manhattan) is divided into two sides- the army and zombies, Alex can join any side if needed. In addition to the main missions that lead to the story, there are various side missions such as hopping from A to B as soon as possible, or joining army or zombies and mass slaughter of members of the other side .For each upgrade, you need a certain number of Points experience, which you can collect by performing major missions, defeating an opponent base, performing one of the missions or consuming one of the people who are important to the story. This consumption is extremely cool, urban, and brutal, and for certain people, Alex can enter into memory and fill in some of the missing stories after eating. Of course, it is not necessary to do those missions, nobody defends you to freely run in NYC, enjoy the views of the tallest buildings and then jump into the air and fall on the road, destroying all within a ten meter radius or you can steal a tank, which you find on your way and with it destroy your opponent's base. There are indeed a lot of possibilities, blood is poured in hectoliters, the originality and atmosphericity certainly does not lack. Although at the beginning it seems that nothing can stop Alex but as you progress towards the end of the game, the game is going to be harder and harder, with opponents becoming wiser and more durable, so later boss battles will need a little more effort and sweat. 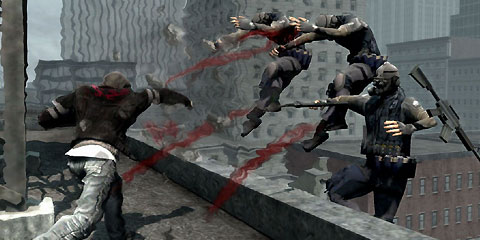 As far as the graphics side is concerned, Prototype is still good-looking game,but it is nothing special.After all, it is a fact that our main hero is often surrounded by dozens of enemies, and such scenes would be quite problematic to run in full detail if the game had such a hideous visual display. Thanks to a fairly decent optimization, i did not notice any interruptions and problems when encountered in mass battles.

Thanks to a fairly decent optimization, i did not notice any interruptions and problems when encountered in mass battles.

I don't like how you explained the story i'm sorry, i think you could write it with less details. For someone who haven't even played the game yet but read this article would never enjoy the story after knowing all these..