before starting the article:
"First, the Mobile legends article that you saw 2 times on voting lately, is written by me and it rejected by the moderator for spelling errors, so after fixing some issues, I post it again. unfortunately one of the members thought that it is a copy, so all of the voters vote that it is plagiarism, please make sure to read it all, the article is mine, not a copy."

in this article, I'm going to review "MOBILE LEGENDS BANG BANG", a Multiplayer Online Battle Arena IOS/Android game created by Moontond Studio. You may know some of the MOBA pc games like DOTA2 and League of Legends, in the first thought maybe creating a MOBA game on android/IOS seems to a stupid act, but we saw successful project like "Vainglory" so the Moontond decided to create a game like League of Legends and unbelievably it was a huge success.

For understanding the game and explaining how rank games work, we should look at the map below. so, First look at the game's map.

A quick look at the map:

We have three lanes, middle lane, bottom lane, and top lane. Between each lane, for each team, we have the jungle, four areas, for example, jungle number one, between the top and middle lane of team one. six Turrets at each lane, three for each team. a river that separates the map into two ground. two positions on the river for special monsters (turtle and lord) and the last Turret (like ancient in DOTA 2), so now you know some detail of the game, let's move on. 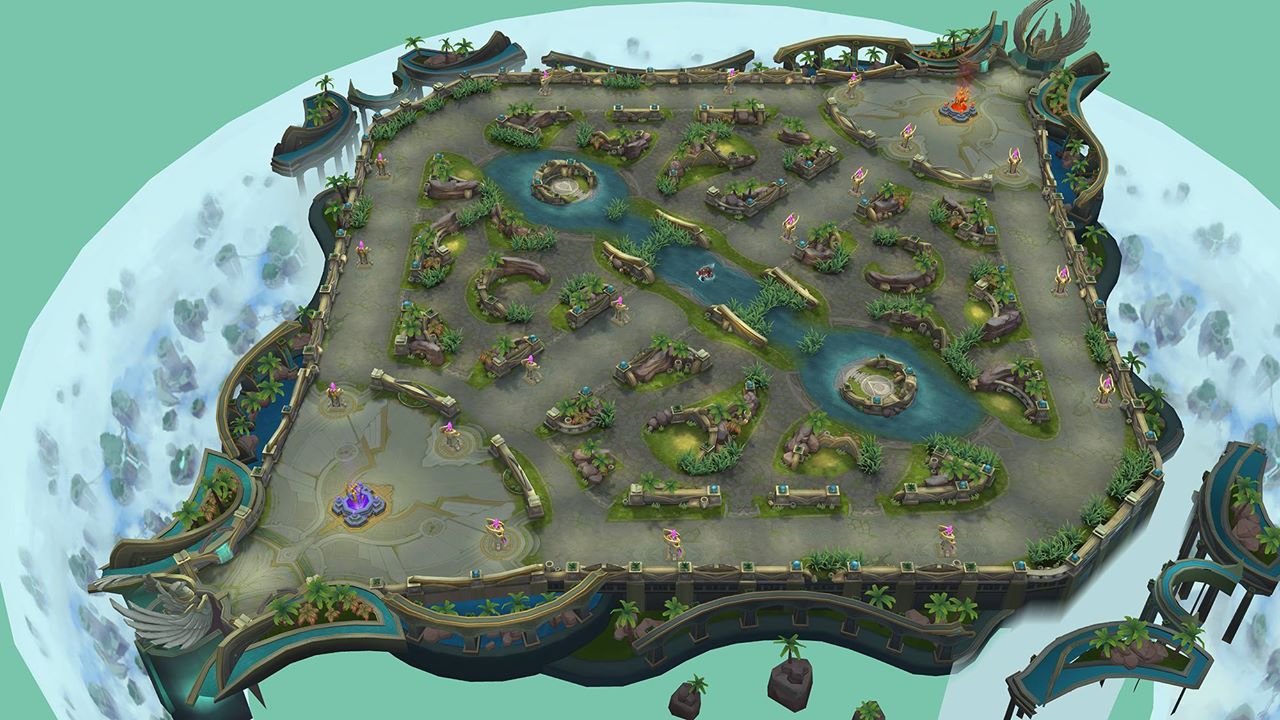 you start the game by selecting one hero, the game gifts you some of the heroes in the first but other heroes should be bought at the store. you and your teammates should destroy enemy's Turrets and get to the final one and destroy it to win the match, easy like that? No, of course not because another 5 players are defending their base and they follow the same plan to destroy yours. Like other PC MOBA games you will earn golds by killing enemy's minions but there is no last hit and things like that here (like pc games), just need to be on specific range to get the gold, neutral creeps known as jungle creeps are also placed in some specific positions, some heroes are known as jungler which they grow up by killing jungle creeps at the start of game. Some jungle creeps also drop health portion as rewards after killing them. A giant and powerful monster is placed at two positions of the map, the team who defeat this monster can use his help to offend the enemy Turrets and destroy it (use it as a tank).

The main purpose is destroying the last Turret and win, you can destroy one lane and push to destroy the last or clear all the lanes and enjoy killing enemies.

Maybe you say, "is this the only map I can play?", there are several maps and modes of games that you can see in the gallery, in one word the game can entertain you well with a variety of heroes and having multiple game modes.

For controlling your hero a touch button on the left side of your screen is available, four active skills on the right side and attack button placed below them also three active spells that you can use in battle to help your gameplay, buying items is easy with all the help that guides provide for each hero, you can use your own item sets just by clicking on the "$" mark on the right corner of the screen. As you can see in the picture. all the things you need like your battery life, network latency, minimap etc. are well designed and placed in appropriate positions, you can communicate with your teammate in short time by using alarms on the right side of the screen or using prompt messages.

all the heroes that you can play, have been shown on the store, you should buy them, as I've said. In some special events, some of the heroes will be free to play and you may earn some heroes by completing special tasks during these events, a group of players said that some of these heroes are useless or weak but I assure you that all of them can be destructive, if you know how to play them, the mastering of each hero takes a while so be patient.

I installed this game on my LG G4 for the first time and because I love playing MOBA games, I enjoyed it so much, now that I'm playing it on my Ipad, with a bigger screen the real pleasure can be felt. the game has no intention to leave you just after a win or lose you want to try another match and it keeps on and on till you find yourself playing a couple of hours. nowadays many 5v5 games have been introduced and honestly, they have high-quality graphics and beautiful heroes, but if I want to introduce you a MOBA game, I will tell you "MOBILE LEGEND" is one of the best choices.you can see some of the game's environment.

you can download it for IOS/Android from links below:

one of the best game

nice things to do here too