The indie games are gradually more robust, so it has become commonplace to be amazed by titles in this scenario that grow bigger and attract the players' gaze. HOB is an example of this. Betting on a simple but well executed formula, the title stands out by its proposal.

HOB is an adventure game, with isometric vision starring a young humanoid creature endowed with a glove full of abilities. The focus of the game is the solution of puzzles that clear your path, and during this journey powers are discovered and the world around you will transform as your exploration takes place.

The game has a beautiful art direction. HOB brings vibrant, detail-packed and inspiring scenarios in the steampunk universe. The architecture represents a highly technological environment, with a surreal aesthetic surrounded by a world nothing urbanized, following a style similar to what we have already seen in RiME, The Legend of Zelda Wind Waker and Twilight Princess, for example.

PC gameplay in the standard keyboard configuration is not as user-friendly as the commands are concentrated near the directional keys (WASD) and the action keys are practically below these movement keys, so depending on the size of the person's hand can be hampered by the need to position the streets hands on the left side of the keyboard, one below the other. The most appropriate is for the person to set the keys before starting to play in a more comfortable position, or if possible, to try the title via a control. It is worth noting: there are no problems in the gameplay, it is hardly an ergonomic question that is solved in the game setup. 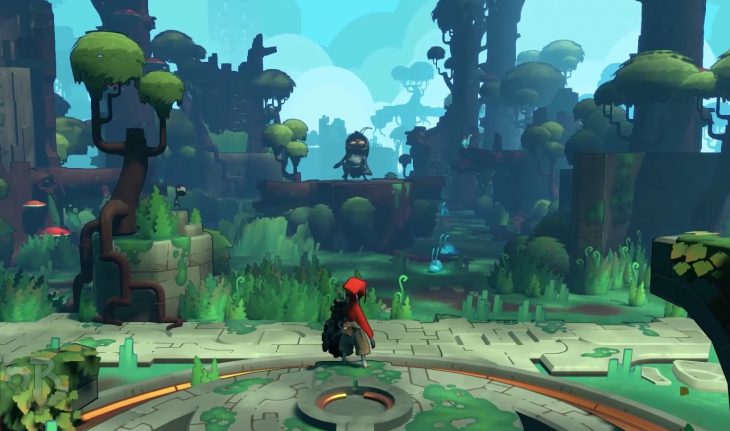 HOB is an exploration game and from the beginning does not pass any tip to the player. It is necessary to go out on the map and understand what is happening, in other words, exploration is the key to your answers. There is no speech in the title and we also do not have the strong presence of soundtrack, but the game is musicalizado by the effects of the environment that are present and represent very well each area of the game.

There are bouts during the journey. Basically all the struggles are all about rolling and attacking when the opportunity arises. There are no big challenges in the fights, but sometimes you can be harmed by the camera, because as said before the HOB has the predominantly isometric view but does not give the camera control to the gamer, ie the viewing angle is automatically adjusted from according to your position, so in some moments you may find yourself in a blind spot.

Our protagonist is strong. Your glove has amazing abilities that help solve the puzzles and also tackle the monsters. With the punch it is possible to break surfaces and hit hard on opponents; with super speed you can move quickly from point a to point b and also "cross" the enemies; and with the hook has the ability to grab high areas and also the core that some enemies.

HOB is a simple adventure that is based on classic elements, but with a level of difficulty adjusted for the present day. The story is captivating as well as his art work and he becomes attractive for his proposal, which is currently rare to see in the games. As complex as a puzzle can be, it will never take much of your time, testing your reasoning fairly, so it is a game suitable for young and old, perfect for a weekend.

CONCLUSION
HOB is a puzzle game starring a mysterious character who relies on the surreal powers to break into a land full of surprises. The player discovers what is happening there next to the character, thanks to the absence of dialogue. The proposal is captivating and appeals to fans of such games.