Rate this article "Gigantic: The next eSports or another moba copy?"

Gigantic: The next eSports or another moba copy?

Gigantic is a free to play 5v5 third person shooter with Moba elements, though it's really a 6v6, because your team is being aided by a huge guardian. Kill enemies, protect your creatures and kill the enemy guardian to take victory home. Today we're going to see if this game has a shot of making it big or if it will die out soon.

What is the goal in Gigantic?

You and your team are helping your guardian to defeat the opposing guardian, while your enemies are trying to achieve the same thing. The guardians are very strong and cannot be attacked directly. The only way to harm them, is if your guardian becomes strong enough to weaken the other guardian for you. To make them stronger, teams have to collect power for them. This can be done by killing enemy players, enemy creatures or by collecting power orbs. Once a guardian has enough power, it will attack its rival, pinning it down so your team will be able to harm it. Both guardians have 3 hearts, each with its own health bar. When a health bar is fully depleted, the guardian will lose a heart. You win when the enemy guardian loses all its hearts.

The creatures that were mentioned are also known as the turrets in this game. But unlike the turrets you find in other Moba's, these creatures need to be summoned by the players, and can be summoned again when they've been killed. There are currently 5 creatures in the game, and every creature has a special power that contributes to your team:

Aside from the obelisks, creatures can only be summoned on your side of the field, and they will collect power orbs for you. However, enemies can kill these creatures and steal the power orbs on your side. Every creature can be upgraded to make them stronger and more efficient, but watch out, because upgraded creatures give more power once they've been killed.

Every decent Moba with skills comes with Ultimate skills, the most powerful ability in a character's skill set. Gigantic's heroes also come with ultimates, but unlike other Moba's, these skills can only be used once you have enough focus. These skills have no other costs, and don't particularly have a cooldown timer, it depends on how fast you can earn focus, and the only way to earn focus, is by attacking enemy targets. You can charge up to 3 focus and every focus point will make your ultimate stronger. Focus is also the resource you need to upgrade creatures, so know when it's better to save it for an upgrade or to use your ultimate at the right time.

What is it that makes this game unique?

The characters and the art style are definatly the first things that stick out. This game has a nice cartoon-ish look and the characters are some of the most original ones that have made an appearance in a long time. From a wand-stealing goblin capable of teleporting to a mysterious one armed fencer with a rodent in his or her shoulder. One of the things that make these heroes feel unique, is because that the female characters are wearing proper clothes. No bikini's, no cleavage, no accentuation on their booty, nothing filthy like that. And that's how it should be. A woman in war isn't going into battle without clothes. Especially not when they wear a jetpack. 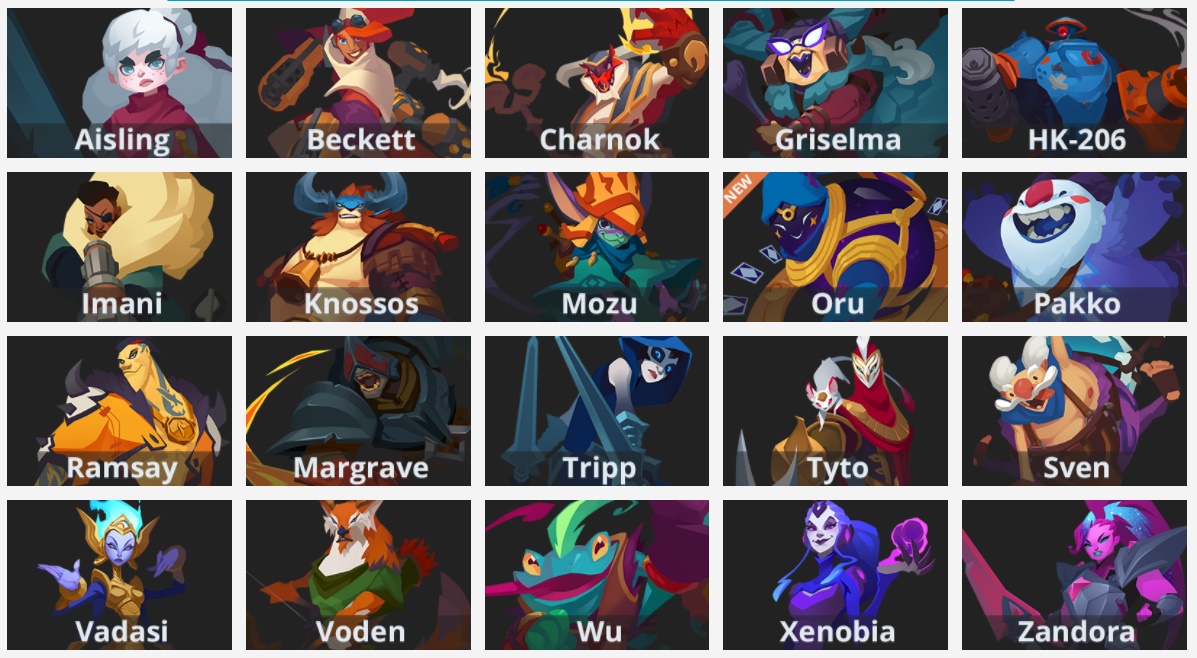 Each hero comes with a different voice, personality, and skillset. While every hero has been given a role, that doesn't mean that the support can't do serious damage, or that the tank can't be the assassin. Each skill can be upgraded, but again, unlike other Moba's, an upgrade does not necessarilly mean it will deal more damage or heal more. Each skill has 2 upgrade paths, and both upgrades can be useful in their own way. You'll options where a healing pool will be able to cleanse all debuffs from your allies, but you can also upgrade that pool to gives allies a jump boost. And when you upgrade a skill once, you canchoose between 2 other upgrades as well. Figure out a build that works and be able to change your upgrades accordingly. Some skills are completely useless against certain teams.

The game currently has 21 heroes (Rutger missing in the image), 3 maps, a practice arena, 1 map close to being released and 3 other maps in the making. New heroes and skins for heroes are being released every monthly.

Is this game Pay to Win?

Gigantic is a free to play game, which means it will come with a premium currency people can buy and spend on various things. The game is not really pay to win, however, every creature comes with a different version of itself, that is slightly stronger than the base creature, and you need to buy the base Drake and Obelisk. The creatures you get from the start are all you need to win, the other creatures are only stronger when they have been upgraded, and their upgrade cost is bigger than those for their base models.

The premium currency, known as rubies, can also be spent on skins, extra fortune cards, boosters for experience points or crowns (the ingame currency), and heroes and creatures. There's nothing you can buy with rubies that will give you an advantage over your enemies. Skins and weapons will only make your hero look different ingame, boosters will only give you rank experience and crowns when winning a match, and fortune cards also give experience and crowns upon completion. Your rank level also doesn't do anything other than giving an estimate of how long you've played Gigantic and reward you with crowns, fortune cards and rubies when you rank up. 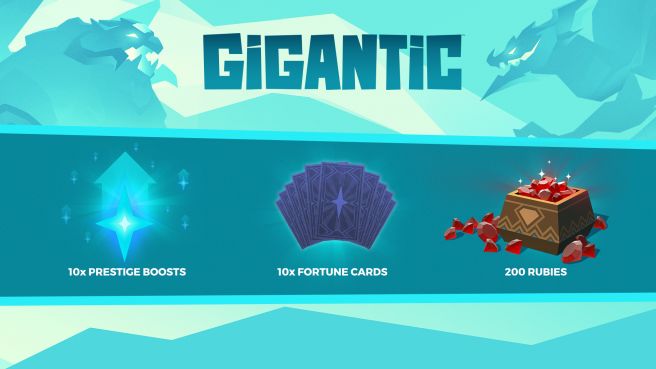 The creatures and heroes can be bought with crowns, which can be earned for free by playing the game. Every week, you'll get a new hero rotation, which will give you 5 heroes you can play for free during that week. This selection always consists of an assassin, a support, a tank, a shooter, and one wildcard, which can be any other hero (aside from the newest hero). This selection is also different for every player. This is nice, because it prevents seeing the same heroes all the time during a week and has less people fighting over a certain hero.

The game also allows you to earn alot of rubies. You get rubies for every 5 ranks you level up, you get them when completing sets of fortune cards (new sets arrive with every new hero, every month), and there are often events where you can win them. The amount you can win is crazy, as you could be able to buy at least 5 legendary skins for heroes, without ever having to pay real money. You'll never see Riot giving away more than 400 RP, which can only buy you 1 out of 3 skins.

In the end, there's nothing you can buy withreal  money that will make you a much better at this game. However, people that do pay for this game are able to unlock heroes, creatures and skins faster. You don't pay to win, but you can pay to save yourself time.

What are the downsides of Gigantic?

It's a very different game, that might be a little difficult at first, but when you know how everything works, it's really fun to play. However, a major downside of the game is that the developers are currently ignoring the major flaws. The RAM requirement for this game is 6GB, while alot of players only have a little less than that or only have 4GB. There's also the 60 FPS lock and random disconnects that may occur.

Currently, the matchmaking is also quite broken. When you're new, you'll be put up with people at your own level, but when you actually get better, you start being put in teams who are much lower than you. People with more than 6000 MMR start being put in team with people below 5000 MMR, while playing against a team higher than 5000 MMR, and it's as good as impossible for one player to defeat a 5-man team on his own. So when you get better, you will have fewer matches that are really close, and more stomp or be stomped matches. There is also no word on a ranked mode yet, which is a real shame, because that could fix the match making problem alot. 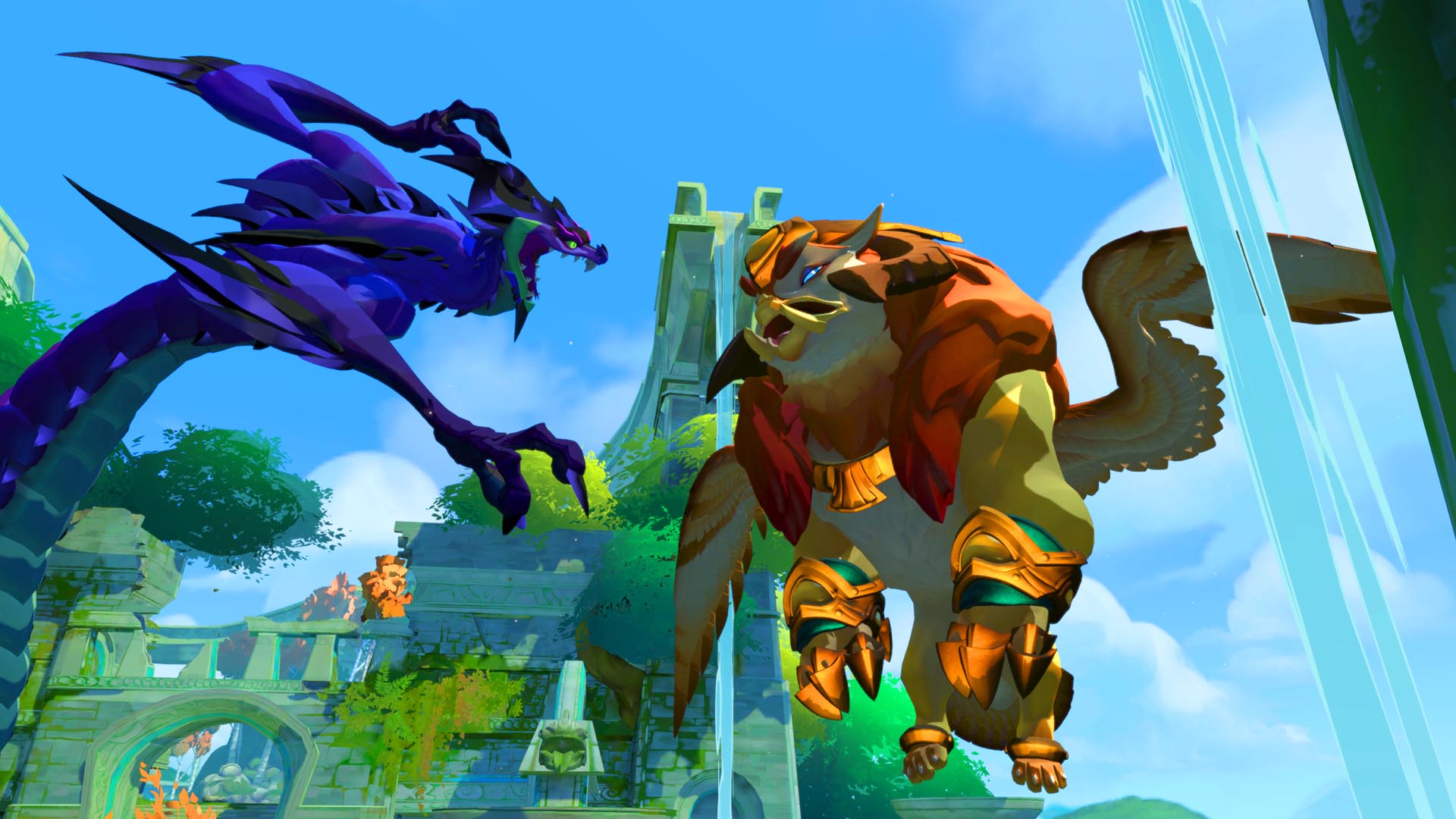 The community on the other hand is a rather good one. Like any competitive game, there will always be people who will misbehave, but Gigantic has a pretty decent community. However, if someone does misbehave, there is no ingame feature to report them. You would have to make a screenshot and send it to support, and hope things change.

Then there's also the free to play model. People who won't pay for the game will end up grinding crowns to unlock new heroes, and this might take a while, especially if the person in question has a job or goes to school.

Is it worth investing time and money into Gigantic?

In it's current state, it's really hard to say. It's  certainly recommended to try the game and decide for yourself, but don't invest money into it until you've played for at least a few weeks. It's still uncertain whether this game will grow to be the next game on eSports or not, but it sure has potential. The developers just need to invest more time and resources into fixing above mentioned problems and then it's ready to hit the big--I mean, gigantic league.

Rate this article Gigantic: The next eSports or another moba copy?

Gigantic is a free to play 5v5 third person shooter

I just noticed that somewhere, the formatting went terribly wrong