At this point, it is already superfluous and remember how long it has been waiting for the third part of the famous Diablo series.

What am I really talking about?

Well, the explanation is quite ungrateful. This type of perfection lies in the connection of seemingly invisible things such as the balance between different statistics or the general randomness that Diablo manages to maintain freshness after countless hours of play. I mention this for the reason Diablo 3 is a perfect example of this. As we will determine later, it is not a game for which we have absolutely nothing to object, but at the same time is the unique title of its genre. In other words, that all of its competitors will unite their strengths and ideas, we would not get a better game again from the title that is right in front of us.

Diablo 3 in the sense of the story has an acceptable solution - it is understandable to those who meet with the series for the first time, and it is also interesting to those who follow it from the very beginning. Namely, the game has several links to the previous parts, but there are some new characters that we have not met before. The plot is relatively intriguing, and it comes down to the fall of the meteor in the city of Tristram. Of course, this event points to a number of threats that are yet to come, but we leave that part of the fabula to you for research.

"It should not be surprising at what level of quality CG animation is done, but fascination does not wear you." 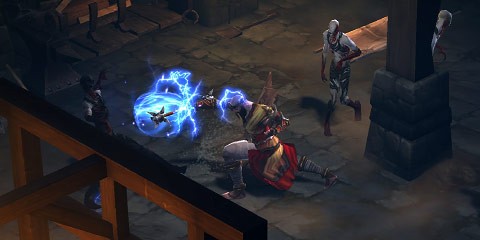 My impression is that this story is not an epic that we will persuade our children, but one can not deny that it is well-designed. There are unpredictable reversals and interesting complications leading to them, which is certainly a good basis for this game. After all, the story is now much more interesting when the characters got their votes. It sounds like a somewhat funny compliment, but twelve years ago the situation was not like that. Also, you should boast great animations that connect the story through four chapters. Since Blizzard is not supposed to be surprising at which level of quality is done and CG animation, but the fascination does not wear you. Simply put, Diablo 3 has the best CG animations that you will find in a game. Point.

Although behind Diablo is a complex balance statistic, the gameplay is simpler than before. Specifically, the game is at Normal weight relatively light. A checkpoint system has been introduced with which you have always been close to the last location in the event of death, and the death penalty itself is not as dramatic as before. Moreover, elements such as using the portal and identifying the equipment are now completely devoid of any restrictions, and appropriate items need not be used for their use. 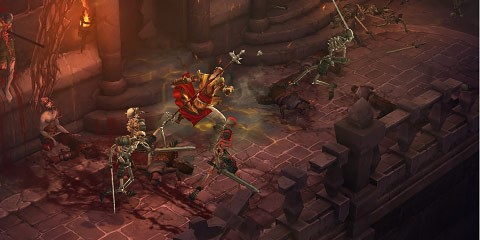 Furthermore, the promotion system is arranged so that the player no longer has a dilemma in order to unlock skills in the order. This order is now defined in advance by the game itself, and the player is assigned another choice. Namely, each class can simultaneously use six active and three passive skills. With promotion, twenty active and fifteen passive skills are unlocked, so the player can choose which ones to use them. The choice is more extensive in that there are five active modes for all active skills that modify them. It's a huge advantage that all skills and runes can be redistributed at any time, or changed without any limitations. So, you are never condemned to just one selected skill and you will never make a mistake when choosing a mistake that you can not correct. The system is extremely flexible and far more accessible than the previous Diablo solutions.

Playing with different classes is always a different experience ...

Some may not like this simplification, but it should be emphasized that this does not mean that the game has no challenge. On the contrary, the inferno weight that is subsequently unlocked offers a fair challenge. Playing with different classes is always a different experience, and since the average campaign lasts about 15 hours, Diablo 3 has an enviable durability and replay value. A special reward for playing again gives achievements and the possibility of exchanging unique items through the auction house. 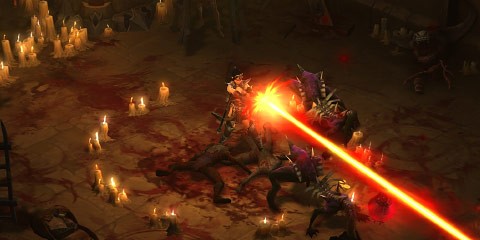 Diablo 3 is a very diverse and addictive game. Taming of numerous enemies with interesting skills is never tiring, and research on randomly generated locations is never boring. That Blizzard's note of perfection is also reflected in the fact that each of your moves in the game is properly rewarded and that there is no empty walk if you are flipping in the wrong direction. Certainly, this is nothing new for this series, so the question arises: What makes Diablo 3 really significantly different from its predecessors?

Novelty definitely has. In addition to the aforementioned redesign in the promotion system, the system has also created a system of creating own equipment. Crafting is done on a simple principle - by destroying the existing equipment you get the necessary materials for making a new one, and the quality of the same will depend on the crafting level that you receive by paying the training. The system is at first useful, but once you discover the auction house, you will direct all your financial inflows right there.

The Auction House allows you to buy and sell items within the auction itself by the principle of bidding. A purchase price is also offered for each auction item if you do not want to compete with other players for a specific item within a specified time limit. At the time of writing, the prices are set only in the currency of the game, but at the end of the month, the items should start selling for real money. The entire auction system works very well, although it's a little awkward that it can not be accessed during the game, but only from the lobby. Also, the auction house overshadows the creation of its own items and the purchase of the same from the traders in the game, and in one way destroys the charm of the search for special items in the game. Of course, no one makes you use the auctions, but if you just look at the offer of the subject, you will hardly resist this novelty. 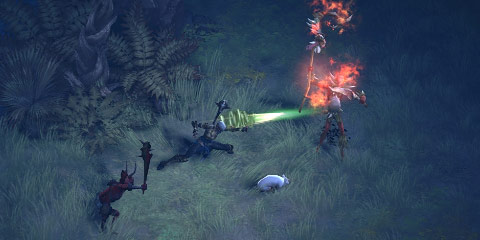 Other novelties are less important, but worth mentioning. Health renewal is complemented by collecting orbits in individual battles, which also makes it easier to play. In the SP mode, it is now possible to have subors that determine the skills and equipment, although they are only auxiliary bumps and will never be useful as actual players in a cooperative game. Furthermore, the collection of gold is now automatically done, side quests are automated, while other novelties represent more options for controlling the game interface. And that's roughly this - do not expect any revolutionary shifts or some decisive changes to the general concept of the game. So it's a bit ironic that the biggest change in Diablo 3 is the necessity of a permanent connection to the Internet, or with Battle.net servers.

Blizzard's tradition of good optimization in front of graphic refinement is also present in Diablo 3. The game does not abound with details and enchanting effects, but it looks quite solid. It is assisted by good design, decent animation of characters and a physical model. Physics is the most significant shift in the field of presentation, because it is interesting to see partial destruction of the environment in the general chaos during the battle. The problem of the light color palette that tortured the fans is not so much emphasized. The truth is that the colors are warmer, but our judgment is that the atmosphere does not suffer because of it. Diablo is still as bloody and gloomy as it is up to now.

It has already been mentioned that the characters are now "sounded" and we will just add that this segment of the sound is done without any fault. For music we can say that it is unique to Blizzard, which in short would mean that it is top-notch and that it fits perfectly to the overall atmosphere of the game.

A more-modern take on a PC classic!

seems good for me, hope it is original work, gets yes

I played this game on the PS3 and I like it!! Though, I like the first two even more. XD Now, gotta wait for the fourth one.

when i make my pc better i rly want to play this game :D