The guys behind the game series Insurgency have not had the easiest way to success. Everything started with the Half-Life 2-fashion Insurgency: Modern Infantry Combat that was developed by what was then a bunch of happy amateurs and released in an unfinished state stuffed with tough bugs. The math quickly became popular thanks to the realism and all the detail work that has been put into the game arsenal. It was after that, like the modem Jeremy Blum (who developed the Unreal Tournament 2004 fashion Red Orchestra: Combined Arms, too) as well as former military commander and strategist Andrew Spearin founded the New World Interactive studio and asked the fans for a slam via Kickstarter to be able to develop a full-fledged sequel to Insurgency: Modern Infantry Combat. Blum and Spearin asked for only 1.4 million SEK via crowdfunding but managed hardly to catch half of that amount, which meant that it took time, power and patience for them to succeed in completing Insurgency which via Valve's "Steam Early Access" pulled in enough with money for New World Interactive to complete the title that was released in 2014 to many fans great joy. 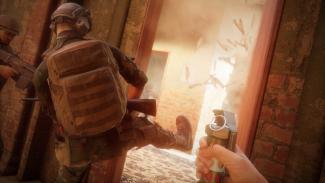 Insurgency was a great game. Sometimes excellent thanks to tactically ingenious basic mechanics, demanding layouts, brilliant sound image and amazingly realistic weapon feel. Now, New World Interactive is back after four years of development of the third Insurgency game and for about three weeks I've spent rude amounts of time with what I consider to be one of the best game of the year. Insurgency: Sandstorm contains three game modes. Push, Firefight and Skirmish differ very little and all assume that two teams (terrorists vs security police) are fighting for three points on each map that must be taken and then of course defended. Anyone who enjoys Halo, Counter-Strike, Battlefield or Call of Duty for the past ten years will of course feel at home in these layouts from the first second and for an old action cod that I signed up I greatly appreciate that Insurgency: Sandstorm feels stripped and old-fashioned . Forget "capture the flag", "battle royale" or whatever is called perks and badges. Here it is about the reward in just using their intrinsic skillz to scratch the opposing team.

Just as in the previous game, the focus is on tactical realism and in several ways, Insurgency: Sandstorm is one of the most uncompromising multiplayer games I've tested since Arma III. The courses are intricate in terms of how they were designed and looked at how the architecture seems and the pace is sky-high. Calling the matches for "intensive" would be an understatement as it sometimes feels a bit like throwing down the brain in a food processor and milling on the full island than lirling a completely ordinary firefight match in Insurgency: Sandstorm. 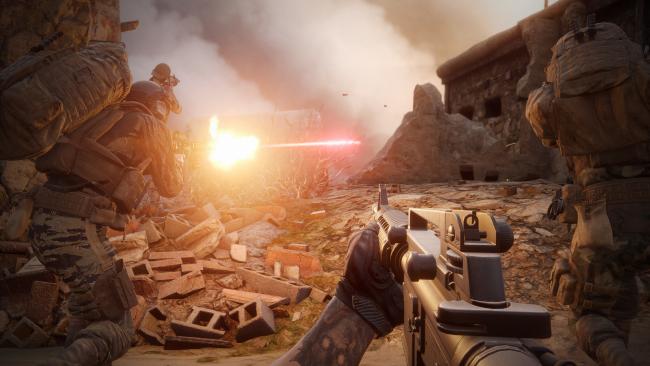 A large part of why this game is so intense, challenging, rewarding and above all addictive spelled the weapon feeling. New World Interactive is undoubtedly the best in the gaming world of building realistic gunpowder that not only looks like the real models and sounds exactly like the real weapons do, but also feels better than virtually every action game of all time. And of course this is not a simple match. Bungie's Jason Jones talked a lot about the delicate, difficult piece of creating a rewarding and above all satisfying weapon feel when they first developed Halo. About how the team worked for months that only, without enemies or objects to panga, would be fun enough to only fire the weapons in the Master Chief's first space journey, in order to rely on how the fire fight in question looks like - the player will always have fun thanks to the weapons and how they feel in their hands. Although Halo and New World Interactive's latest games differ as much as Ratchet & Clank and Hitman, it is clear that the studio here has worked for exactly the same type of basic thought. Because in New World Interactive it is easy to just fire your weapon right into a wall. All guns, moreover, which I absolutely can't say about for example Call of Duty or Battlefield. And in combination with the fact that there are lots and lots of opportunities to upgrade and equip their weapons with everything from other pistons to special magazines, visibility and silencers - it is no exaggeration to call this the game for the craziest weapon cabinet I dug in. 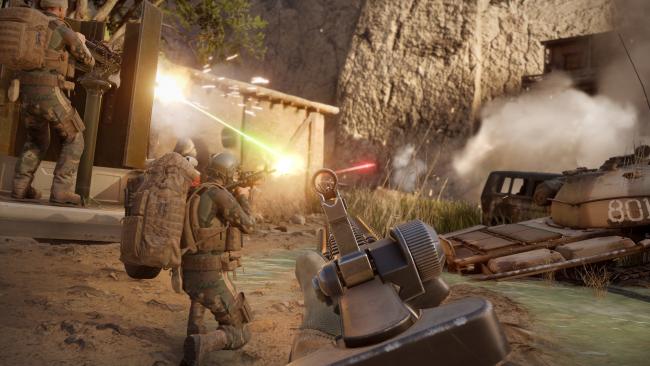 The Fire Fight in Insurgency: Sandstorm is chaotic and it takes training to be able to keep some kind of calm when it is hot. During my first five hours, I was so excited by the very sight of a passing enemy and my weapon's ability to vibrate, slam, slam and shake that I failed to dot what I shot. Because here it goes fast. An arson battle can end in a few seconds if you target your first three bullets really well. Using automatic systems is just to forget for just as in reality you have a spread of the balls that resemble careless murals. This together with details such as the recoil and how to move yourself, makes Insurgency: Sandstorm into a game that I believe in many ways is more realistic than the actual Arma III, which for a long time has been called the world's most realistic action game.

Another part of this title that makes it more realistic and makes it a better sense of true-to-life warfare in urbanized environments is the superior artificial intelligence that Insurgency: Sandstorm developed. In, for example, Arma III, the artificial intelligence commutes between the world's smartest 1000-meter snipers, which dots one between the eyes of the first attempt at pure rama zombie enemies who barely notice that you walk past them. In Sandstorm, both the computer-controlled fellow players (if you are playing with bots) and the opponents behave in a clear, more realistic and dynamically consistent way that does not require human resistance at all to have really fun with Insurgency: Sandstorm. 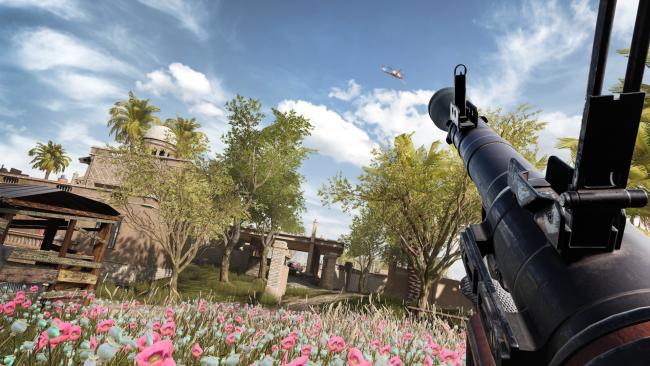 Unlike its predecessor (which was based on Valve's Source engine), New World Interactive has been working with Unreal Engine 4 this time, which of course means this is a very, much nicer game. Sure, Insurgency: Sandstorm can never compete with, for example, Battlefield V, but it is never the point since this, like Arma III, is a game where everything is about realism. The graphics are therefore so simularly tidy and sometimes a little flat looking for light effects but it is still neat. Especially the indoor environments are delicious and the weapons look rude just like the grenade explosions.

Insurgency: Sandstorm is realistic, demanding and often merciless. At the same time, the developers have managed to create a sense of super-entertaining chaos and an unpredictability that get simulator-like action games like this (Operation Flashpoint and Arma, for example) ever approaching. For example, I sat crouching behind a car at one moment, while one of the terrorists laid down gun fire against my shelter via a tripod-mounted, rough-caliber story. This is because his two fellow players could flank me. While sitting there, waiting to be killed soon, one of my teammates set off a bazooka rocket from a window in the house behind me, which not only blasted the car as the tripod mounted guns mounted on which also caused his flanked cronies to fire up in a gigantic cloud of fire, all the while I glanced at the incident through the rear window of the car I was hiding behind. And although this may not belong to the ordinary, it says absolutely something about Insurgency: Sandstorm that, unlike, for example, Counter-Strike or Arma III feels more ... More chaos and hence more entertaining.

The absolute best thing about this game, however, is undoubtedly the sound image. Certainly, purely acoustic, it is hardly hard to beat Battlefield V right now but the weapons in Insurgency: Sandstorm sounds basically better than everything I heard in the game path throughout my life. There is a mechanical weight and a gunpowder boom on firing which I have become heavily dependent on. As I mentioned earlier, it is fun to just grab a full 30+ magazine in a brick wall in this game and this has a lot to do with the perpetually well-made gun sounds. 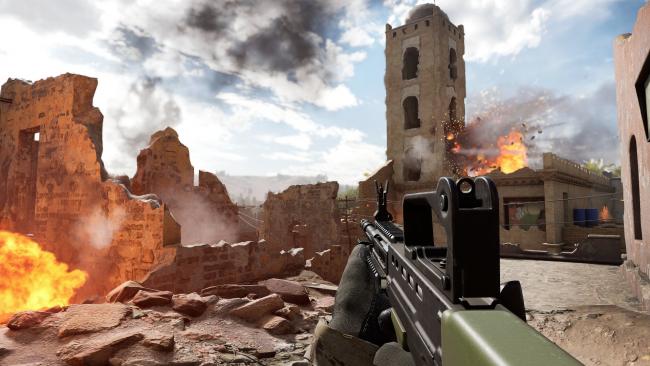 If you like Counter-Strike, Arma, Operation Flashpoint or Battlefield and are looking for a stripped-down chaotic and rewarding tactical / realistic action experience - Insurgency: Sandstorm is definitely a game for you. I might whisper a little about the fact that some textures load leisely well or that there are only three game modes that all remind a lot about each other, but I'm not going to do that. Instead, I want to finish this review by clarifying that this is my favorite game in the action genre in 2018. It's so good. Fantastic good.

Day of infarmy is also good, it's DLC for this game

It ain't much, but It's honest work.

love this game and all works from this stydio!

Yes it does look great

i played this game !not fun
u just get shot from no where