Although I have seen tons of series in my life, for one reason or another, I have never managed to stick to South Park. South Park stubbornly avoided me. However, I have always appreciated it remotely not only from the point of view of humor but also from the importance of this series. Every time a major event takes place everyone is waiting to see South Park react.
South Park: The Fractured But Whole begins where the last interaction is over, with a medieval battle that serves as a kind of mini-tutorial. The game quickly deviates from the story of your predecessor and presents you with the new premise - the cats in the neighborhood began to disappear mysteriously, and Cartman sets up a superhero faction to catch the feller. In fact, I'm sorry, because that's just a pretext to attract attention. In fact, trying to take advantage of Netflix's alleged (and painfully close to reality) tendency to accept any serial idea, Cartman sketches an entire original superhero universe that wants to be turned into a service franchise streaming. Obviously, things are not going well and the group is split into two separate factions due to misunderstandings about who and how many movies/series she receives. 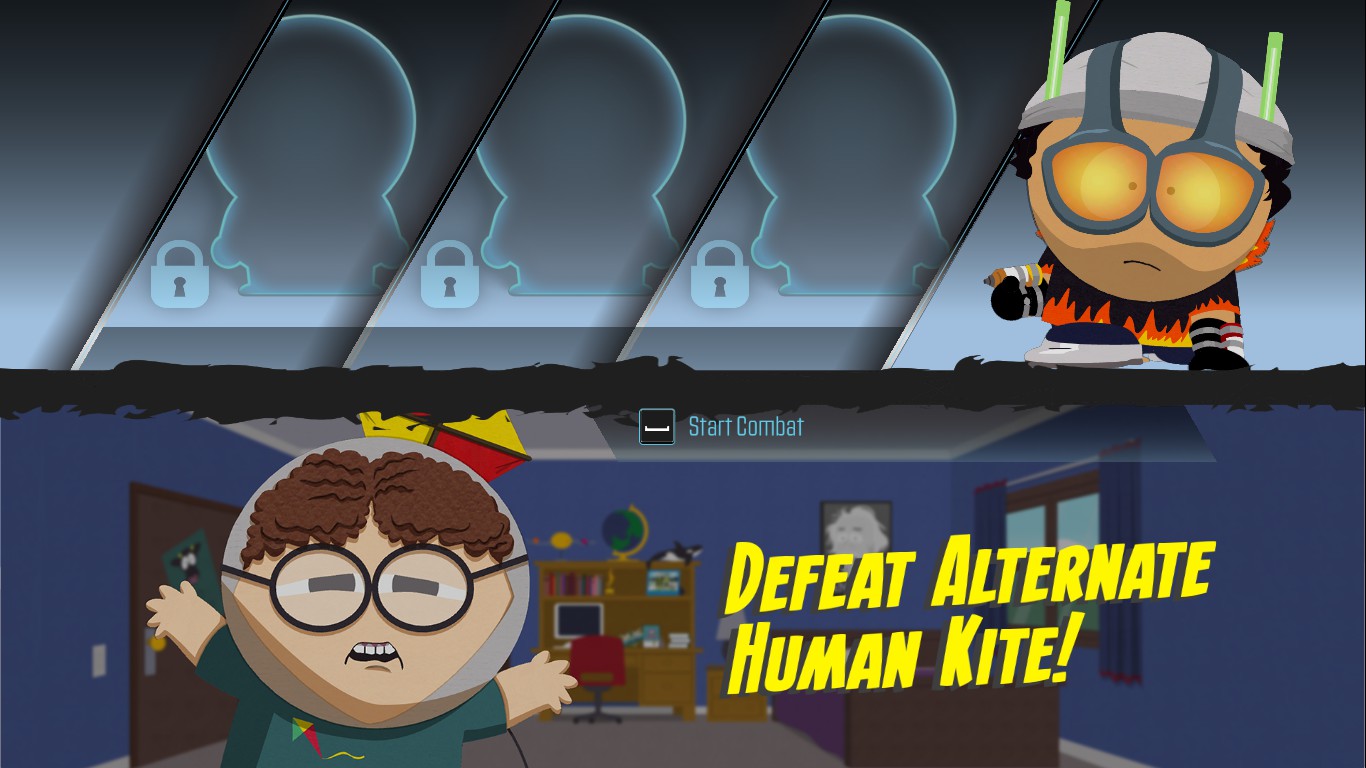 Here's where you, The New Kid (who moved to town three years ago, but please). After you choose your first class - Brutalist, Elementalist, Cyborg, with the option of specializing later - you are in charge of promoting the brand of the future franchise. How do you do that? By the selfies with the locals posted on the Coonstagram, of course. Some will offer them for free, others will ask for small favors in exchange for them. As an avocado millennium, I am, I spent the first three hours of play doing self-sacrifices with everything I've been catching, whether I was advancing my progress story or not.

Taking into account that the SPTFB is basically a game-size episode, developers have to put a lot of emphasis on the presentation and details. Fortunately, the game excels from this point of view. Locations are authentic and full of perfectly executed elements that match this universe. The introductory segments for classes and characters are exactly the theme. Occasionally, during a tense six-boot battle, the combatants move from the street to the sidewalk to let a car pass. Even the pedestrians I walked through absently sneaked at me a replica that made me crawl down on laughter. So the world is alive and cuddled by the eccentric characters and the situations we have familiarized with the show. 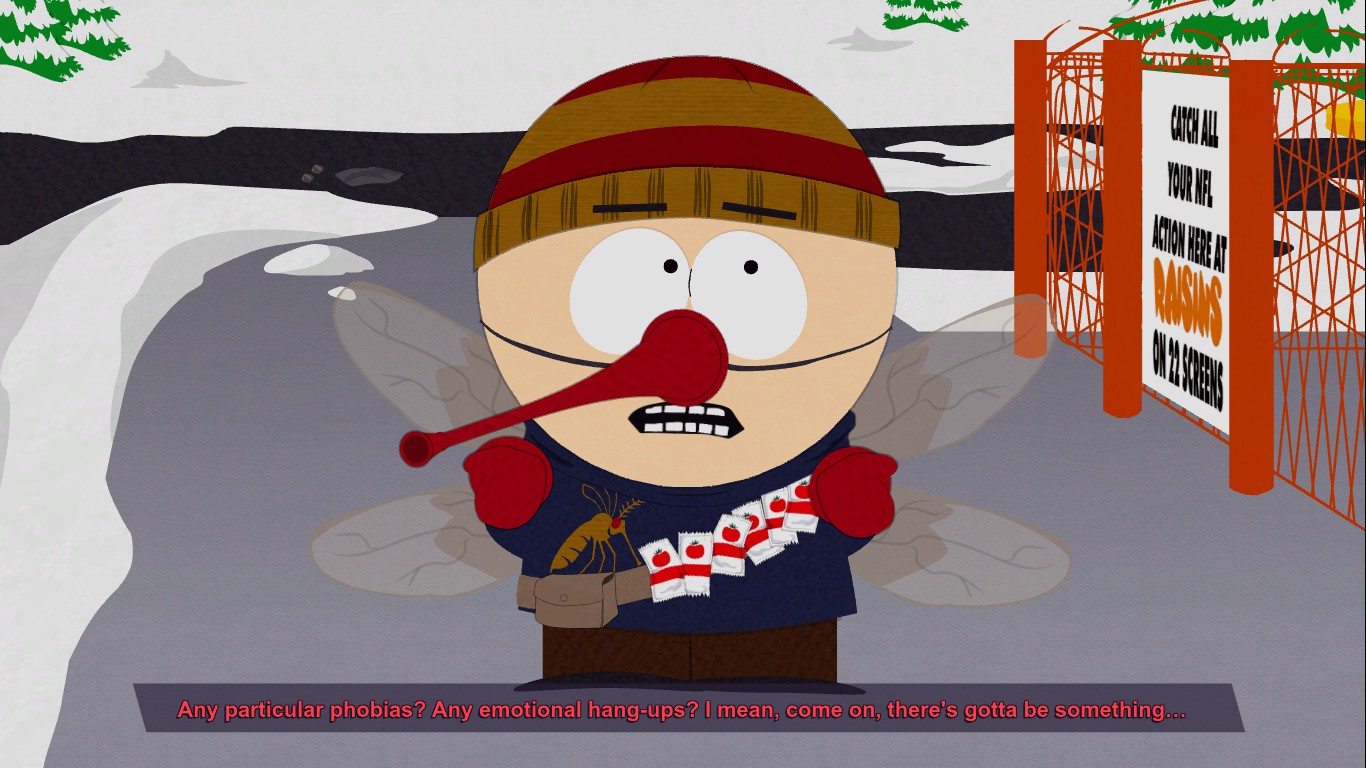 The city itself is full of activities and minigames that will help you progress and improve your character. Without exaggerating, absolutely everything you do in this game comes with your own progress bar. Are you cracking a biological bomb made of your feces? Congratulations, you pushed the leveling bar a few millimeters. Have you found a yahoo poster for Craig? Well, you've taken a step towards the fascinating world of hentai collectors. Did you make a selfie with an old lady in the asylum? Holiday theme, you turned to level 2 influencer (I chuckled like a schoolgirl the first time that my prompt came up). The game constantly encourages you to deviate from the normal course and explore, turn the homes of the locals upside down, interact with the characters, check out all the obscurations of the shit, and so on. I've never felt such a strong impetus to exploring the world of a game since I got Deus Ex.

Class, race, gender and orientation can be changed at will, without affecting the general course of the story. It's not an open-world like Witcher 3, for example. You have the main narrative thread you are forced to follow to advance your character and receive new powers that can be interrupted to complete secondary missions. Progress is quite linear, but honestly, I do not see how else it could have done. Linearity is not always equal to repetition and boredom (see the Metro series for an example of perfectly executed linear games). Probably to relieve players of too much back-tracking useless, key locations and items are placed in such a way as to allow them to handle multiple quests simultaneously. Which is a good thing, because from the very first hour of the game I just felt overwhelmed by the huge amount of loot, locations and secondary goals. This is the mark of a well-designed design game. 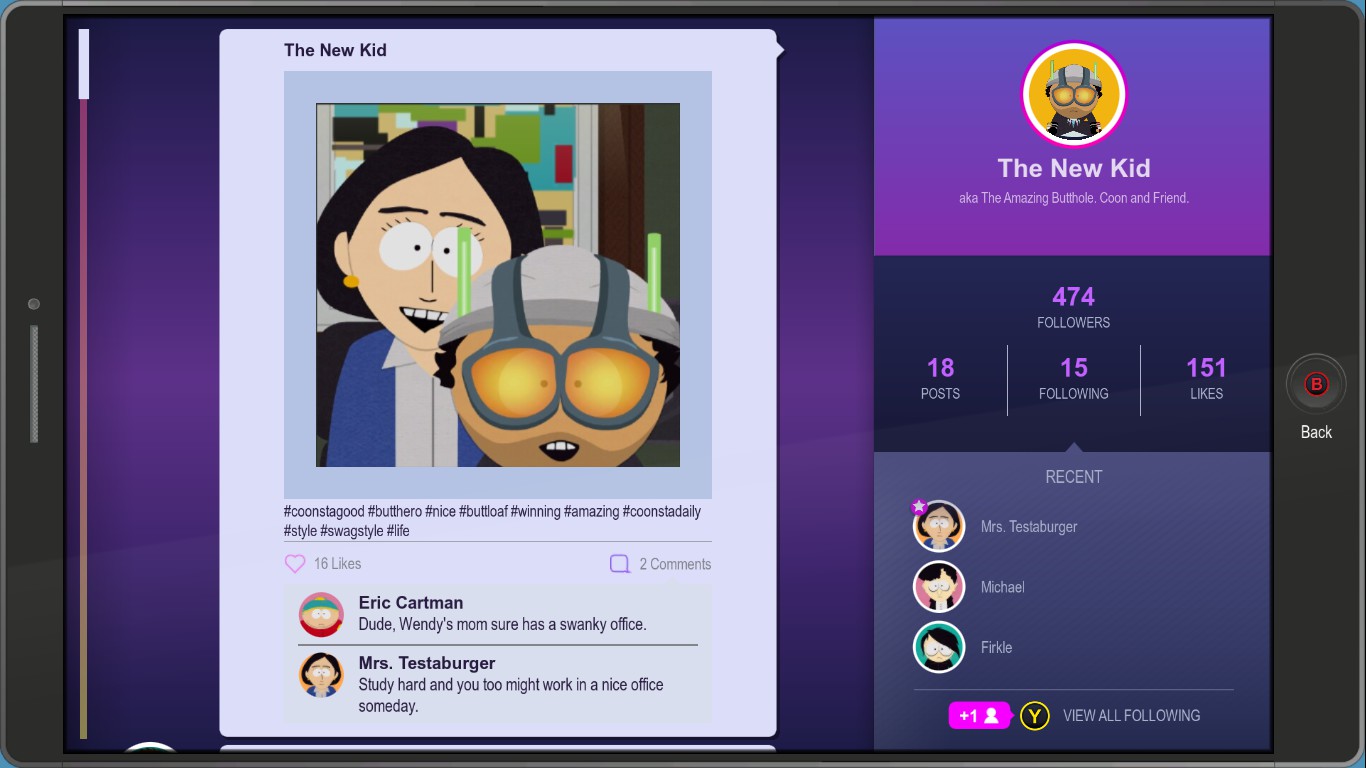 Combat is much better than the predecessor game. It keeps the same turn-based, grid-based style. You can move over certain distances, and your powers affect a predefined number of grids. Combat itself is quite standard and strategic enough, but as far as South Park is concerned, developers have added some thematic gimmicks in tune with the universe. Occasionally, the rules of the fight change and you need to rethink the strategy. For example, an infamous HP enemy that can kill you through a single attack, so you have to make sure you do not get caught up. I'm not going to go into details to keep you from surprise, but I assure you it's one of the funniest moments in the game 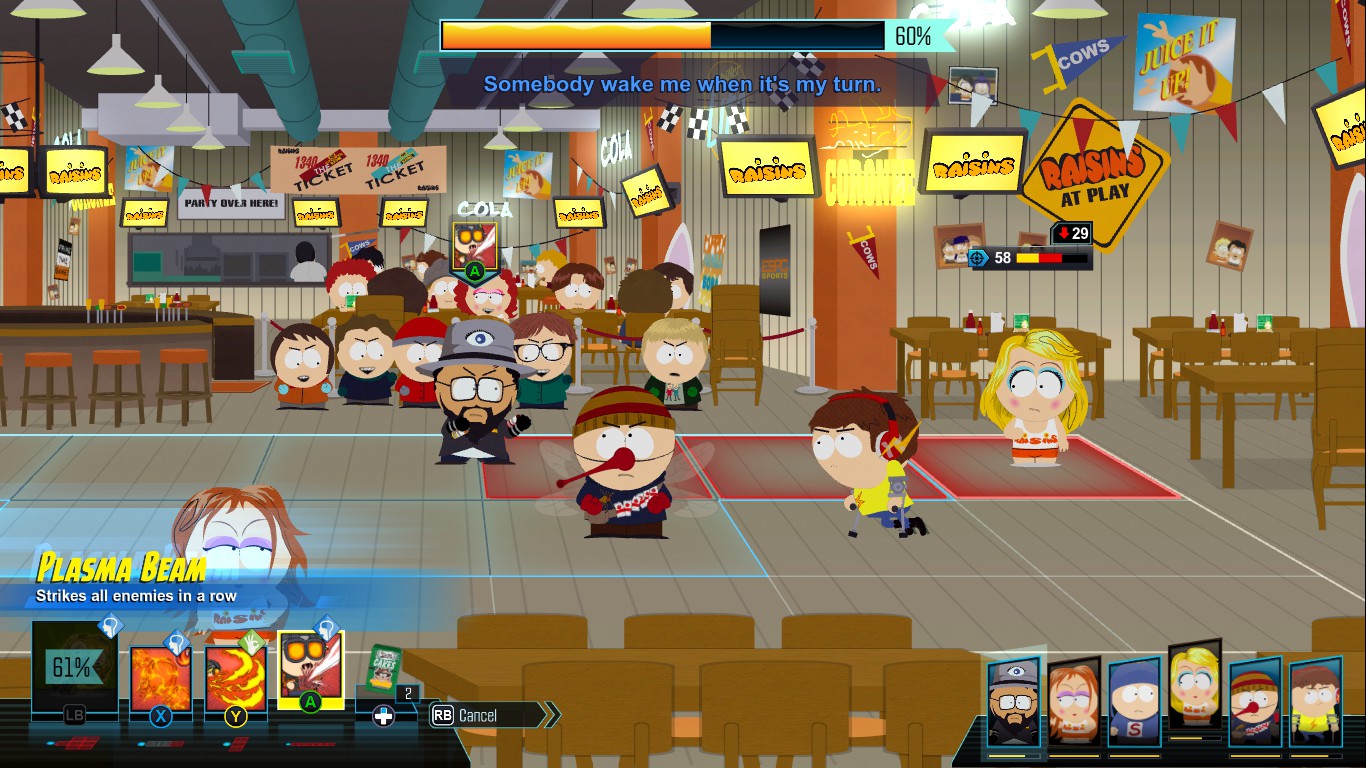 Except for the performance of some stumbling blocks and the sometimes overwhelming levels of tasks and items, I do not really have any negative things to say about South Park The Fractured But Whole. The humor is excellent, the gameplay is satisfactory, the living world and only good to explore. But, returning to the introductory paragraph, I can say with my heart that this title can be enjoyed even by people who are not familiar with the show. Even more, it will even attract them to the serial, as has happened in my case. Now, excuse me, I have to recover some 20 years of controversial but very relevant retrospective social commentary.

Amazing! Why didn't you post this in articles to make some gems?

Because of the animation it is a difficult cartoon to get into but once you see a few episodes you kinda get used to it. Its well worth watching, it is absolutely hilarious.

The Cartoon is funny you guys should totally check it out

its a awesome game. Language are strong recommend only adults.

If you played South Park: The Stick of Truth before and you like it, then you really should try this one.

It's a really funny game