Watch Dogs: Legion is the third installment of the iconic Ubisoft series of games. Generally, it is an action game for which the open world is characteristic. The first part of Watch Dogs debuted in 2014 and immediately gained many fans around the world. The action of this part of the game takes place in the future. It shows an alternate reality after Brexit. The world is changing a lot and nothing is as it used to be. Computers and the automation of everything are common. Research on artificial intelligence is very dynamic, and cryptocurrencies have gained a huge advantage over ordinary cash. All this led to a very rapid increase in large-scale unemployment. The government is happy about this turn of events, and London is being ruled by the military organization Albion, which does surveillance of citizens on a very large scale. A kind of resistance movement arises and opposes the new reality. The hacker group DedSec stands behind the revolution.

The game offers a cyberpunk atmosphere. The world of Watch Dogs: Legion is full of cameras and flying drones. Its main mechanism are various missions and diversified side quests. The creators enabled the player to fight alone, as well as in a multiplayer mode which allows co-operation. A lot of weight was put here on confrontations with enemies, but the interesting thing is that the possibility of killing has been limited. Many of the weapons only allow you to stun the opponents. Watch Dogs: Legion has a three-dimensional graphic design which is very impressive. The eyes are pleased not only with well-looking locations, but also, e.g. small details on the playable characters. 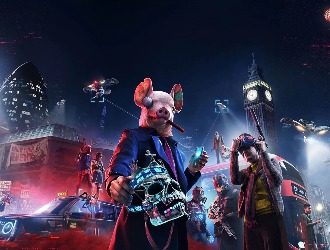 Watch Dogs: Legion is the third installment of the very popular Ubisoft game series. It is an action-packed game characterized by an open world. The first part premiered in 2014 and since then the series has enjoyed unflagging popularity.

Watch Dogs: Legion takes place in the future, some time after Brexit. The world has changed a lot. Automation of every area of life began to exert a great influence on humanity. Research on artificial intelligence has gained momentum. This cult of machines quickly led to an extremely dramatic increase in unemployment.

Cryptocurrencies are dynamically displacing ordinary cash. The government, which should take care of the citizens, does not really care about their fate, and the situation which is taking place is very convenient for the rulers. The result is the takeover of London by the military organization called Albion. Surveillance of people on a large scale is becoming the norm. Fortunately, not all people humbly agree to this reality. The hacking group DedSec decided to oppose this reality and started a special resistance movement. The game's atmosphere resembles the cyberpunk genre a bit. Cameras and flying drones can be seen everywhere. The main axis of the game are various missions, and the players also have side missions at their disposal. The title allows you to play alone or in multiplayer cooperation mode.

The game has a high-quality three-dimensional graphic design. The player is delighted not only with the refined locations, but also the details of the characters. We encourage you to exchange Soul Gems for this unique Watch Dogs: Legion!