Two Worlds II: Castle Defense is a game set in the realities of the Two Worlds. This title tells the story of Gandohar, the main antagonist of the first part of the game. The story is set on the timeline between the first and second part of Two Worlds. Two Worlds II: Castle Defense, however, is a side installment of the series. In the game we play the role of a dark magician who must repel the attacks of his main enemies - Orcs from Antaloor. The gameplay consists in repelling 25 waves of attacks which are performed by an increasing number of enemies. The game combines elements of strategy and planning. 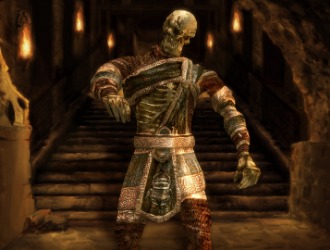 In 2011, the Polish studio Reality Pump created a side part of the RPG series called Two Worlds. The spin-off is set in the universe of the Two Worlds and is telling about the events which happened between the first and second part of the game. Two Worlds II: Castle Defense is a game representing the genre of tower defense strategy.

In the game, we fight off enemy attacks, defending a certain point on the map from destruction. The game tells about the conflict of the dark magician Gandohar with the Orcs of Antaloor. Interestingly, in the previous parts it was Gandohar who was the main antagonist. Exchange your Soul Gems for this game!