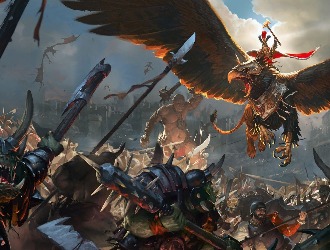 Total War: Warhammer is the tenth part of Warhammer's war strategy series. The gameplay is a combination of spectacular strategic battles with the turn-based kingdom management system.

The world presented is inspired by the dark fantasy environment, known from Warhammer Fantasy Battle. Different races fight here for dominion over the Old World, at the same time repelling the evil forces attacking them. The player can play the role of one of the four playable factions: people living in the mighty Empire, wild orcs and goblins, dwarves or vampires.

The gameplay in mechanics is similar to what we're used to in this series. Directing each faction requires a different approach and a different strategy. Depending on the chosen nation, we also have military units to choose from.

Developing the game on the Warscape engine allowed the game to be equipped with a great graphics, but you have to count on high hardware requirements instead.

Do not wait any longer and now get the Total War: Warhammer game for free!