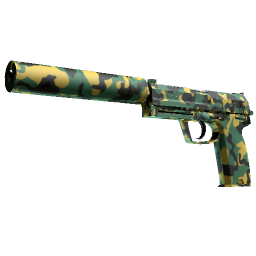 The USP-S | Overgrowth is a very popular weapon of choice for Counter-Strike players. It's a crafty side arm for situational use, or backup in case you need to quickly take out an enemy. It has a built-in silencer so you don't give away your position and it has a high rate of fire with strong recoil, so it's good for controlled bursts and quick follow up shots! The StatTrak™ USP-S | Overgrowth is one of the first weapons that were released in Counter Strike: Global Offensive. It was added to the game on February 21, 2013. It is based on the P250, having a similar shape and color scheme. A weapon that has been carefully selected for you - it will surely be worth the money spent on it! This is a USP-S pistol with a special skin Overgrowth, which will be available in Counter-Strike: Global Offensive. It is a very rare item, because it is only available in cases, but thanks to us, you can get it without opening any!