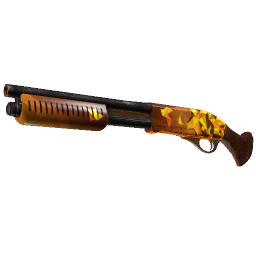 The Sawed-Off is a secondary shotgun that was added with the release of Global Offensive. It has high spread and damage, and can kill enemies at close range in one shot. However, its range is extremely short. The name is an obvious reference to the word "Sawed-Off", which describes a type of shotgun with a short or absent barrel. The weapon was decorated with a red origami pattern. Exchange your Soul Gems for the StatTrak™ Sawed-Off | Origami. The sawed-off is a short shotgun, which is often used by players who prefer close combat. The whole weapon was covered with black spray paint and then decorated with red details made of origami, which are symbols of peace. Exchange your Soul Gems for the StatTrak™ Sawed-Off | Origami.