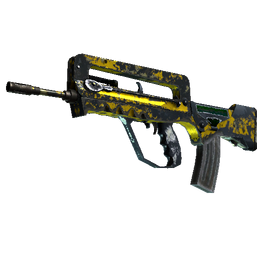 The French FAMAS is a machine gun used by the army. It has a lot of metallic elements, so it does not look much like the original version. Famas Neural Net is a rare skin that can be obtained only in special cases or by purchasing. Exchange your Soul Gems for the StatTrak™ FAMAS | Neural Net. CS:GO is a multiplayer online game, in which players compete in teams against each other. They use various weapons and accessories, and they try to achieve victory by eliminating the entire enemy team or capturing a specific point. The FAMAS is a fully automatic assault rifle, using the 5.56x45mm ammunition (standard NATO caliber). It has been in service since 1978 and it is still widely used in many countries of the world. The "Neural Net" pattern is made on the basis of a camouflage suit of an elite French unit - Commandos Marine. The FAMAS is a french assault rifle from the famous CS:GO series. The in-game weapon has a set of stickers, which were applied with a neural network. Exchange your Soul Gems for the StatTrak™ FAMAS | Neural Net.