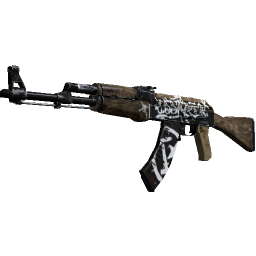 Counter-Strike: Global Offensive is Valves game released in 2012. The game is a continuation of the first-person shooter series, started as a modification of the cult game Half-Life. There are two five-player teams in the game, fighting against each other.

The powerful and reliable AK-47 is one of the most recognizable assault rifles in the world. This artificially aged and graffiti-covered rifle has been equipped with the StatTrak ™ counter to track user kills.

Exchange your Soul Gems for the StatTrak ™ AK-47 Wasteland Rebel.