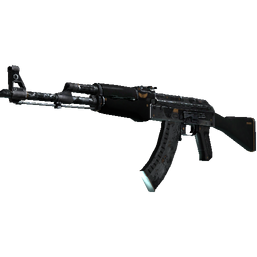 The powerful and reliable AK-47 is one of the most recognizable assault rifles in the world. It is the most deadly one when shooting with short, controlled series. The weapon was decorated with a combination of hydrographics, template and thermal transfer stickers, and equipped with a counter to track the number of kills.

Exchange your Soul Gems for the StatTrak ™ AK-47 Elite Build.