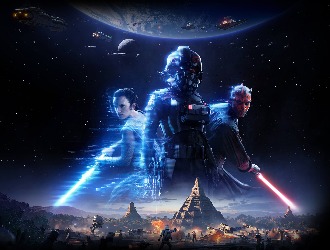 The plot of the game takes place after the destruction of the second Death Star. The leader of Inferno Squad, in which we are embodied (Iden Versio), is to avenge the Emperor. On her way, she meets both characters completely new, and those known from the series, such as Luke Skywalker, Rey, Kylo Ren, Yoda and Darth Maul.

Star Wars: Battlefront II is a classic science fiction shooter in terms of gameplay. This means that our attention will be mainly focused on performing tasks and eliminating opponents. The weapon that we will use for this is modelled on the film series, but it is characterized by greater diversity.

A new element is the introduction of battles in space, played with the help of fighters and spacecraft. The single player feature campaign was also expanded (as opposed to the previous part, which mainly focused on the multiplayer mode).

What definitely delights in the game is a three-dimensional graphic design, well-polished on all platforms, and a beautiful soundtrack. The creators had to focus heavily on these technical factors to meet the high demands placed on them as the game is a reboot.

Is Battlefront 2 better than its predecessors? It will be best if you judge it yourself!