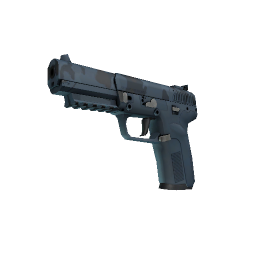 The Souvenir Five-SeveN is a souvenir version of the Five-SeveN pistol, featuring a factory-new finish and is only obtainable by opening a souvenir package. This weapon has no difference in performance to the base Five-SeveN. The weapon was covered with a forest-colored undercoat and then decorated with custom-made black details. Exchange your Soul Gems for the Souvenir Five-SeveN Forest Night! The Five-Seven, also known as the FN57, is a semi-automatic pistol designed and manufactured by FN Herstal. The gun was introduced in 2004 and has since seen a wide range of modifications and variations. It features a tactical accessory rail on the frame for mounting weapon lights or lasers. Exchange your Soul Gems for a Souvenir Five-SeveN | Forest Night from Counter-Strike: Global Offensive. The Souvenir skin for the Five-SeveN pistol. This is a cosmetic item, it has no effect on the characteristics of the weapon.