Get SOULCALIBUR VI absolutely for free!

The Soulcalibur game series has been on the market since the mid-90s. From the very beginning, Namco Bandai from Japan has been responsible for creating and publishing it.

The latest, full-fledged, sixth part of the game is Soulcalibur VI released in October 2018. The game, from the very beginning, tells the story of the eternal battle of the demonic Soul Edge against the eponymous saint Soul Calibur. For this reason, even though the game represents the beat’em up genre, the battles here are performed with a wide range of melee weapons. Various swords, axes and sabers are put into the fight.

The interesting fact about this part of Soulcalibur is the presence of characters from other cult games. We can encounter here, among others, Geralt from The Witcher or YoRHa No.2 Type B from Nier Automata. 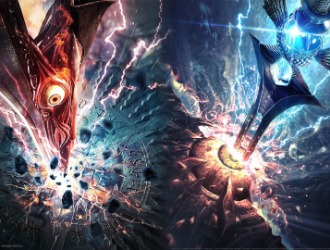 In 1995 Namco Bandai started a series of games which still wins the hearts of players from around the world. We are talking about the Soulcalibur series of which the sixth, full-fledged part - SoulCalibur VI - was released in 2018.

The game is a beat’em up game, but we don’t use the fists of our characters here. Because the plot of the series tells the story of the eternal battle between two Magic Blades representing the forces of Good and Evil, the fights in Soulcalibur are performed with melee weapons.

﻿ Do you want to play the latest part of this iconic game? Exchange your Soul Gems for the Soulcalibur VI PC GLOBAL code today.