Sekiro: Shadows Die Twice is an outstanding adventure action game with stealth elements created by From Software. The game was released in 2019, just a few days ago, and it has already beaten records of popularity in the world. Sekiro: Shadows Die Twice is a long-awaited production, headed by Hidetaka Miyazaki - the creator of such titles as Dark Souls and Bloodborne.

Sekiro: Shadows Die Twice is set in an alternative reality in 15th century Japan. The game takes place in a world where historical facts are mixed with fantastic and futuristic elements. The game, although officially representing the genre of adventure games with elements of action and sneaking, is strongly associated with other productions by Miyazaki. Sekiro: Shadows Die Twice is another game representing the difficult but well-developed, so-called ‘soulborne’ genre.

In the game, we play the role of the Japanese warrior called Sekiro. His name means "One-armed wolf" and it did not come out of nowhere. A few years ago, the hero was kidnapped, then tortured and left to die. The Wolf, however, was saved. In the place of his cut off hand, he received a deadly mechanical prosthesis. The story of Sekiro: Shadows Die Twice begins when Sekiro tries to save his Lord and take revenge on his own tormentors.

Sekiro: Shadows Die Twice is a rather difficult, but well-developed, interesting game really worth playing. The game can be completed in several different ways, and the playstyle itself can be based on both fighting and sneaking behind the backs of enemies. 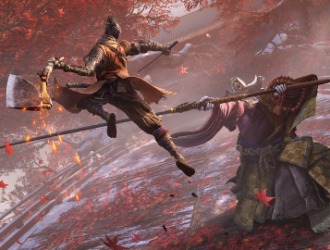 Created a few years ago, the unofficially called ‘soulborne’ game genre has absorbed thousands of people around the world. One studio and one man - Hidetaka Miyazaki - stood behind the success and unique style of such games as Bloodborne and Dark Souls. The latest representative of the genre is Sekiro: Shadows Die Twice. Sekiro: Shadows Die Twice is officially qualified as an adventure action game with stealth elements set in fifteenth-century Japan in an alternative reality. The game can be played in two ways, fighting using a system based on counters, dodging and quick attacks, as well as sneaking behind enemies' backs. Sekiro: Shadows Die Twice is characterized by its beautiful, realistic graphic design and intuitive mechanics.

The setting of Sekiro: Shadows Die Twice is, as we mentioned earlier, an alternative vision of 15th-century Japan in which both real historical facts, characters and technologies are interwoven with a fantastic futuristic reality. We take the role of a one-handed warrior named Sekiro, armed with a deadly mechanical prosthetic.

Sekiro, also known as the One-Handed Wolf, was kidnapped, brutally tortured and left to die a few years ago. Now, in turn, he sets off on a journey trying to save his Lord - an heir of noble blood. During the journey, Sekiro hopes to find his tormentors as well.

The game, despite the fact that it was released in the second half of March 2019, has already won the hearts of players around the world with its plot and setting.

If you would like to play this excellent Japanese game with elements of RPG, Sneak, Action and Fantasy, exchange your Soul Gems for a Sekiro: Shadows Die Twice code!!