Get Rust absolutely for free! 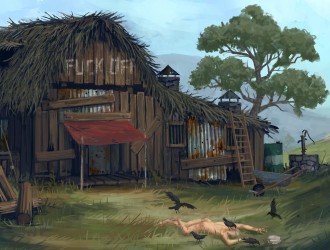 Rust is a sandbox survival action game that also represents such genres as Indie, MMOFPS and crafting. The game was set in a world very similar to the universe known from such games as S.T.A.L.K.E.R or DayZ. The game was made by Facepunch Studios. The studio has already released two unusual games - Gary's Mod and Before. Rust was first released in 2013, but gained real popularity when it hit on Steam in 2018. Rust can be played in two ways and both are very extensive, giving great opportunities. The world can be explored alone, and the player may focus on discovering all of its dangers by himself. The game can also be played in multiplayer mode. You can face real opponents through the network. As we previously mentioned, the gameplay of Rust is set in a universe very similar to worlds known from popular post apo games. Rust, however, does not focus on offering the player an extensive story layer. The main purpose of the game is simple - we have to survive. At the very beginning of the game, we wake up in a random place on the map, equipped only with a stone and several bandages. Using these objects, elements of the environment and whatever we can find, we have to locate or build a shelter, ignite fire and find a source of food. The game is about surviving in an unfriendly enviroment in which everyone and everything around is turned against us. We have to face enemies in the form of other people or wild animals. Everyday we also must deal with cold temperatures, hunger and injuries. At the low temperatures, we must create or find suitable protective clothing and light a bonfire. When we get hungry we will be hunting animals. When we get injured in a battle, we need to create bandages and patch up wounds. Rust offers an open world and literally endless possibilities. Also, the online mode of the game is very casual and depends only on us. We can choose a loner's life and fight with all opponents or try to cooperate with other people, building a shelter and collecting supplies together. If you want to face the dangers of the post-apocalyptic world and try to stand up against animals and savage opponents, you can now exchange your Soul Gems for your own copy of Rust!