Get Rocket League absolutely for free!

Rocket League is an interesting car game set in a futuristic world. The game is a continuation of the production with the grateful title Supersonic Acrobatic Rocket-Powered Battle-Cars released exclusively for the PlayStation 3 in 2008. Both games were released and created by the Psyonix studio. Rocket League was released in 2015 on PC and PlayStation 4 and in later years also on Xbox ONE and Switch. Rocket League has the function of cross-platform gaming. Rocket League is not a typical car game that focuses around races. The rules of the game are slightly different but very simple. The game is a bit like classic football, but it is not played by footballers. We take control of the ball by controlling small vehicles with rocket engines. The game consists in the clash of two teams made with futuristic cars. The game is enriched by various additions, boosters, accelerations and tricks to help us outmaneuver the opponent and score the goal besting the opposite team. The game is created to provide entertainment for a solo player fighting against the team made of NPC cars. However, if you are looking for more interesting experiences and much more advanced entertainment, try multiplayer, in which each vehicle is controlled by a real person. This mode can be run both on the network, as well as on one console or computer by split-screen mode. There are plenty of ranked matches in Rocket League. The game, however, is focused on casual entertainment and simple matches. As previously mentioned, thanks to the cross-platform feature of Rocket League during the multiplayer game, we can play not only with other PC users but also with console users or vice versa. Comparing Rocket League with the previous part called Supersonic Acrobatic Rocket-Powered Battle-Cars we can easily notice a much better graphic design as well as more interesting mechanics. A better physical engine allows the game to be more dynamic. Do you want to get to know the futuristic football in Rocket League? Exchange your Soul Gems for your own Rocket League code. 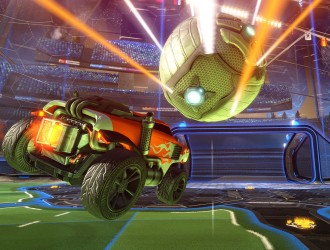 Rocket League is a game that you can play on many consoles and on your computer. It is the continuation of an interesting production from 2008 released exclusively on PlayStation 3 called Supersonic Acrobatic Rocket-Powered Battle-Cars. Rocket League was released and created in 2015 by the Psyonix studio, which has participated in such productions as Unreal Tournament III or Mass Effect 3. Rocket League is quite an interesting, extraordinary sports game, combining car and football games elements. The plot is not very extensive, and the game itself is made to provide pure entertainment. The game offers a possibility of cross-platform play during the multiplayer mode, which brings lots of new possibilities. Rocket League is not a typical racing car game neither it is a football game in which football player characters have control over the ball. In Rocket League, we play the roles small rocket-powered vehicles. We control them and try to play the ball to score a goal. To spice up the gameplay, the developers have tried various interesting tricks, upgrades and special attacks that will allow you to fool your opponent even more effectively. Two teams consisting of 1 to 4 players in form of small futuristic vehicles fight against each other in the game. The rules of the game are similar to the classic soccer. Rocket League can be played both solo, when we are confronted with car NPCs, as well as in multiplayer. As previously mentioned, the game offers cross-platform gaming, where players can meet players from other platforms. In Rocket League you can also play multiplayer on one computer or console using a split-screen. The game, compared to the previous part, has a better graphic design, more complex game mechanics and a much more powerful engine, which converts into dynamics. The creators also took care to of the player by providing interesting, innovative solutions. We can, for example, switch the gravity field during the game. If you like undemanding fun, entertainment games, sports games and futuristic climates, you will surely appreciate Rocket League. Today you can exchange your Soul Gems for your own version of the game!