Get Portal 2 absolutely for free! 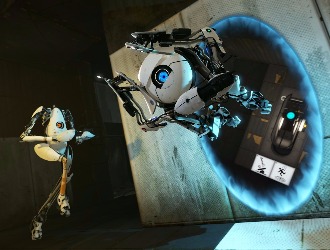 Portal 2 is the second part of a cult game with several awards. It is a first-person action and logic game, where the player teleports himself and other objects with portals, while resolving a bunch of riddles.

The games includes more new characters in the solo mode, a new portion of puzzles and test chambers as well as new areas in the Aperture Laboratories. We will still have, however, to join forces with the deadly GlaDOS.

In the co-op mode, they included two playable characters, new testing chambers and a whole new story. One will have to re-evaluate their own knowledge about portals and unite in order to succeed. To make it easier, you can can make use of the split screen option or a micro-camera and place tips for your companion in form of informative icons.

Portal 2 is recognized as being one of the best games in the world, not only as an action and logic game. Just as its previous version, it has received numerous awards. It is certainly worth adding to one's library now.