Get Nier: Automata - Game of the YoRHa Edition absolutely for free!

Nier: Automata is an adventure action game in construction reminiscent of shoot'em up games. In contrast to most of the hack'n'slash games on the market, Nier: Automata for full recognition requires the player to repeatedly pass it, each time surprising him with something new. 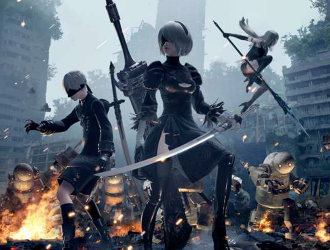 Nier: Automata is an adventure action game that is a continuation of Nier. As befits an RPG, the focus here is on character development and to eliminate as many enemies as possible.

The action takes place in a post-apocalyptic version of the distant future. An alien invasion defeated mankind by killing almost all but a handful of survivors. The last human units have hidden in bases on the Moon, where they constructed the android YoRH No.2 Type B.

The task is clear: take back the Earth from the enemy. Accompanying us in it will be an android scout YoRHa No. 9 Model S. But will it be so easy?

Nier: Automata is a hack'n'slash depicted from a third person perspective. The game focuses mainly on overcoming opponents with the help of an extensive combat system.

The free exploration of post-apocalyptic Earth enables the open structure of the world, we can travel on foot or on the backs of animals, and sometimes even controlling the mecha.

Only a few times the passage of the game allows us to fully discover all the possibilities of the game, and the end itself has more than twenty-six alternative versions.

Do you want to know them all? Get a game Nier: Automata for free!