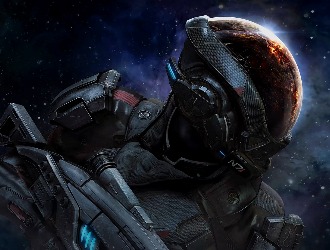 Mass Effect: Andromeda is a forth part of the iconic series.

The plot of this game is not directly related to the story of a constant fight between Commander Shepard and the Reapers. We take a role of a member of a very important expedition that aim to explore a new world and creatures that live there. Many years after the events which occured in the trilogy, we will be able to explore the Galaxy of Andromeda, completing some quests, side tasks and making some dificult moral choices that may influence our further game.

The expedition was mounted seven years before the events from the first part, with the aim of exploring the galaxy and finding a new place to settle down. During the six-hundred-year journey, the members of this expedition were all hibernated, so they had no idea about the war against the Reapers in the Milky Way.

As it was in the other parts of the series Mass Effect, the game was presented from the third-person perspective (TPP). The most important element of this game is exploration of the new world. Our character is visiting new planets at the controls of the ND1 Nomad vehicle, equipped with a special booster and a jetpack feature.

When it comes to the fight, the essencial point is not only the weapon we choose, but also a tactical approach and defence. With every fight, our character can earn some experience points, which can help him to develop his skills.

Apart from the main quests, Mass Effect: Andromeda propose many side tasks that are not connected with the basic storyline. The additional quests allow us to gain knowledge about explored areas, collect the resources and the technology necessary to create new elements of our armament.

For all the players who are bored by the story mode, there are four-people and multiplayer modes. The creators increased the dynamics of this game with the new jetpack feature, improved the artificial intelligence of the opponents and rebuilt the system of using the abilities.

Thanks to the Frostbite technology, the graphics represent a very high level and please the eye with the multitude of detailed elements and special effects. The atmosphere of this game is emphasised by the music, composed in accordance with the dynamics of this game.

Don't wait any longer and get your Mass Effect: Andromeda for free right now!