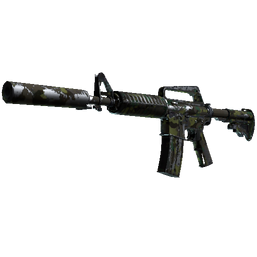 Counter Strike is a series of team shooters released for the first time in 1999 as an add-on to the cult classic Half-Life. Released by Vavle in 2012, Counter-Strike: Global Offensive is the next part of the series. CS: GO is a simple game, where two five-person teams - terrorists and anti-terrorists - are fighting against each other.

The M4A1-S is a rifle which has a smaller magazine than its un-muffled version. The rifle provides quieter shots with less kickback and better accuracy. The weapon was covered with hydrographics in the form of forest camouflage.

Exchange your Soul Gems for a M4A1-S Boreal Forest!