Get Killing Floor 2 absolutely for free!

Released in 2009, Killing Floor is a commercial edition of a very popular Unreal Tournament 2004 mod. In 2016 the game was continued by Killing Floor 2 released on PlayStation 4, Xbox ONE and PC. Killing Floor 2, like its previous part, was produced by the Tripwire Interactive studio. Killing Floor 2 is a cooperative action shooter maintained in a climate of horror. The game was created in FPS mode. There is not a very extensive storyline here, the game focuses on cooperative entertainment for several people. Killing Floor 2 is about fights between small groups of trained soldiers and mutants. Bloodthirsty monsters are the result of illegal medical experiments performed by a futuristic corporation. Killing Floor 2 is kept in a B-class horror style. At the moment when we start the game, the world has already been attacked by the mutants.There are hundreds bloodthirsty mutated monsters all around. In each subsequent mission we travel to new locations that are modeled after real cities. The game is set in the near, post apocalyptic future in our world. During the game, we can find a lot of real ruined cities, for example Paris. Killing Floor 2 was created with mechanics very similar to the first part of the game. Our mission is to defend the enemy's attack by working with other players. The co-operation mode in multiplayer is a crucial element in the game. Each fight with mutants is divided into waves during which we must defend against larger quantities of more dangerous opponents. Each wave ends with a moment of break during which we can buy ammunition or check the barricades. At the end of the fight we will have to fight the strongest Boss. Do you like FPS shooters and a bit of post-apocalyptic climate of horror? Killing Floor 2 will certainly be a lot of fun for you. Exchange your Soul Gems for a game key. Few more moments and you will play your own Killing Floor 2 copy 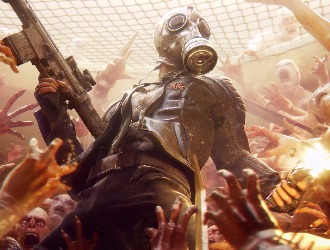 All people who like horror films embedded in the post-apocalypse should definitely get to know Killing Floor 2. This game is a continuation of the Unreal Tournament 2004 modification called Killing Floor. The first part was released in 2009, the second part, in turn, was made in 2016 released on PC and PlayStation 4. A year later the game was also released on Xbox One. Killing Floor 2 was produced and published by Tripwire Interactive studio. Killing Floor 2 is a brutal shooter set in the near future, in our reality destroyed by the zombie apocalypse. These zombies are mutants created by the illegal and dangerous researches made by a medical corporation. The game is simply about fighting hordes of mutants in the wave system. The game, as we mentioned earlier, is set in real but post apocalyptic world. Travelling across the game’s map you can see real European cities like, for example, Paris. You play the role of a soldier trained in combat and well prepared for a fight against mutants. Each mission is a one full battle divided into waves. After each wave we have a few moments to regroup, buy ammunition and repair the barricades. At the end of each battle we have to face a boss - the strongest mutant. The mechanics of the game are not much different from the ones presented in the previous part. However, the creators have tried to spice up the maps, weapons and characters a bit, by offering various improvements and new abilities. Compared to the first part, the game is characterized by much better graphic design, realistic animations and an extensive, brutal system of combat. Killing Floor 2 was made for multiplayer and cooperation between players. Would you like to join a group of soldiers fighting bloodthirsty monsters? Killing Floor 2 can be yours today. All you need to do is exchange your Soul Gems for your own version of the game!