Horizon: Zero Dawn is an action game produced by Guerilla Games studio, which premiered on PlayStation 4 in 2017. A few years later, it premiered on the PC, thanks to which it can reach an even wider audience. The plot of the game is extremely interesting. The player has the opportunity to control a young warrior named Aloy, who, together with small human tribes, is trying to survive on Earth. The action is set in the future, when human civilization has been pushed to the background, and the ecosystem is ruled by intelligent machines that resemble animals and dinosaurs. Aloy is young and curious, she wants to find out what happened to people and her true destiny. The girl is brave and cunning, she is not afraid of challenges. In her inventory she has a weapon that was made of parts of defeated machines. She can use it very well and fight the encountered creatures. Aloy has at her disposal, among other things, futuristic bows, ropes and many more.

Horizon: Zero Dawn combines elements of an action game, RPG and stealth games. The player can interact with the encountered NPCs, perform tasks, collect items and use them in crafting. The control of the game in the PC version includes both the mouse and the keyboard. The whole thing has an excellent visual setting, available in 4K version, and the sounds create a great atmosphere. The beginning of the adventure with young Aloy guarantees many hours of interesting gameplay and discovering the future and the past in a changed world full of action and amazing machines. 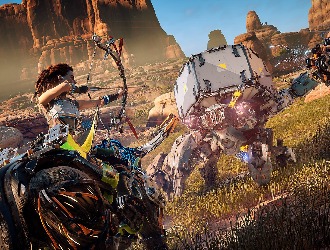 Guerilla Games is a development studio owned by Sony Interactive Entertainment. It was established in 2000, but it has been using its name only since 2003, which was related to the sale of the original brand to Media Republic. Guerilla Games is based in Amsterdam, where the director is Herman Hulst. The studio has released many amazing, world-famous games, such as the Killzone series or ShellShock: Nam '67. In 2017, they decided to release one of their amazing action games, Horizon: Zero Dawn, on PlayStation 4.

Originally, Horizon: Zero Dawn was only released on PlayStation 4, but a few years later the game also premiered on PC. Its action takes place in a changed future, where the main role is played by huge, intelligent machines that resemble animals with their strange appearance. The whole thing is related to the fall of civilization and the struggle for the survival of the human species. Each player takes on the role of a young heroine named Aloy, who wants to know her destiny and what mankind looked like in the past and what led to its current state. Aloy is a skilled warrior who has great equipment, obtained from creatures walking around the world. Thanks to it, she can very skillfully fight the enemy, as well as develop crafting skills. What's more, she is not afraid of huge robots and willingly accepts challenges.

Horizon: Zero Dawn has excellent visuals, it can also be played in 4K quality, which adds unique effects to the screen of any monitor! If you are interested in Horizon: Zero Dawn, you can play it now by exchanging your Soul Gems from the Gamehag portal for this unique reward