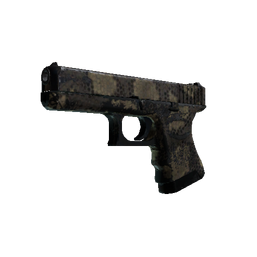 Counter-Strike is a series of multiplayer shooters which started in 1999. Its latest part created in 2012 by Valve studio called Counter-Strike Global Offensive is one of the most-watched e-sports games in the world.

The Glock 18 is a 21st century gun developed and produced by the Austrian company Glock. It copes well with non-armored opponents, and at the same time allows you to fire in a series of three shots. The weapon was covered with hydrographics in the form of snake skin.

Exchange your Soul Gems for the Glock-18 Death Rattle.