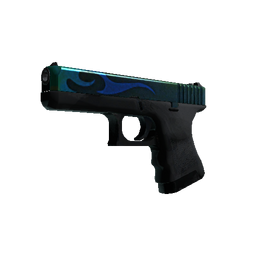 Started as an add-on to the game called Half-Life, the Counter-Strike series has become one of the largest multiplayer e-sports games in the world. Its newest edition called Counter-Strike: Global Offensive released in 2012 by Valve has many fans around the world.

Allowing you to shoot a series of three shots, the Glock 18 can be used in fights against unarmored opponents. That’s why this three-shot pistol works well in the first few rounds of the match. The weapon is decorated with a flame-like pattern with blue patina.

Exchange your Soul Gems for a Glock-18 Bunsen Burner.