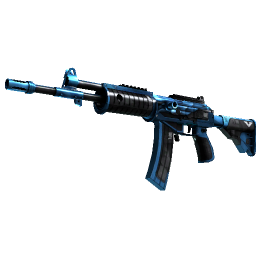 The Galil AR is the updated version of the popular assault rifle Galil. It’s lighter and more accurate than its predecessor, which makes it a great alternative to the M4A1-S. It has been decorated with a pattern of stones, which adds a special charm to this skin. You can exchange your Soul Gems for the Galil AR Stone Cold. The Galil is a weapon that can be used by the Terrorists in the game Counter Strike. It is an assault rifle that has a medium rate of fire. This rifle can be used in close combat, but it works best at medium to long distances. Because it is an open-bolt weapon, you will need to keep your finger on the trigger to keep the rifle ready to shoot. Get the Galil AR | Stone Cold now!