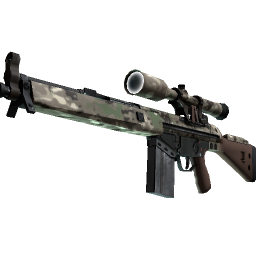 The G3SG1 is a semi automatic sniper rifle that was developed in the 1970s by Heckler & Koch. In CS:GO, the G3SG1 is one of the most popular weapons among fans of this series. In addition to its precision and good damage, it also features a unique camouflage pattern - the only one in the game. You can buy it now in exchange for your Soul Gems! G3SG1 - is an assault rifle from the game Counter-Strike, which was released by Valve Corporation. This model is based on the real weapon, but has been significantly modified by its creators. This prize gives you access to a very powerful weapon. If you want to be a good sniper, this model will definitely help you.