Get For Honor absolutely for free! 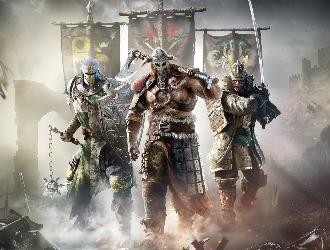 Ubisoft Montreal presents a network action game TPP, in which vikings, samurai and medieval knights face each other on the battlefields. For Honor is a production dripping with brutality, full of multiplayer enhancements, although it also offers a singleplayer campaign.


The creators of such titles as Watch Dogs, Far Cry 4 and Assassin's Creed: Origins have made another hit. The game is played in an alternative universe resembling the Middle Ages. There are three factions of The Chosen (modeled on Japanese samurai), The Legions (resembling knights) and The Warborn (inspired by vikings).

In game we can find six game modes waiting. Each of the nations represents twelve playable characters, and in one match can control up to four of them. Unlike serial soldiers controlled by the AI, they have unique abilities that can determine the fate of the battle.

Although the action takes place in the alternative world, real devotion to the styles of struggle of individual nations was treated very seriously. The Art of Battle mechanic was designed especially for this purpose. It draws attention to such details as the side from which we keep the weapon while blocking attacks.

After a well-played attack, the player can use special skills such as firing a chosen area from the catapult, quickly resurrecting friendly units or increasing the combat effectiveness of the soldiers.

In addition to the multiplayer game, a campaign has been made available to introduce players to the world of For Honor. This is a series of separate missions in which we'll direct the heroes belonging to different factions.

It sounds interesting? Don't wait and now get the For Honor for free!