Get Five-SeveN | Triumvirate absolutely for free! 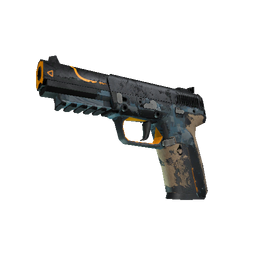 Five-SeveN is a pistol with low recoil and high rate of fire. It was painted in the image of the Triumvirate, an association of three Roman emperors. Exchange your Soul Gems for this pistol now! In the world of CS:GO, there are a lot of pistols. The Five-SeveN is one of the most popular. It is an inexpensive weapon with low recoil, which is why it's so popular among many players. The Five-SeveN pistol is a lightweight weapon, perfect for quick shots. It was designed by FN Herstal in Belgium. The Five-SeveN was originally released in 1998 and has been used by many counter-terrorist units around the world. This item has the smallest magazine of the pistols in Counter-Strike - only 5 rounds. However, it is still quite effective in close range combat. The pistol comes with a silencer which reduces the sound of firing, but also reduces the damage inflicted. However, the Five-SeveN does not lose much stopping power even with the silencer. The word "Triumvirate" is Latin for "rule of three", and comes from ancient Rome when political power was divided among three individuals.