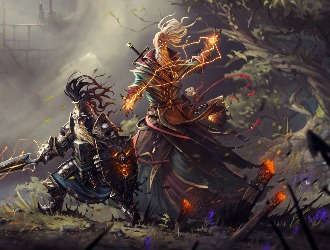 
Once again, we are going to the magical land of Rivellon as a user of the power of the Source and threatened by hunters. The conflict between these two groups continues to inflate, and to make things worse - terrible monsters from Void are coming to the world of mortals. The double threat causes the climate to be much heavier compared to the first part of the Original Sin II and provides an increased dose of emotion.

At the beginning of the game, as in most classic RPGs, we start by creating a character (this time just one) choosing his race and biography. Depending on the story that we determine for our hero, the reaction and tasks that the inhabitants of the world will face will be different.

In the combat system we have the ability to climb and simplify the scoring of activities which weren’t presented previously. There are also new skills, combinations of elements and powers of the Source. However, it’s still based on turn system.

As in the prequel, we have the opportunity to play in co-operative mode. Previously mentioned biographical backgrounds, however, may impose on the members of the teams different goals, turning cooperation into competition.

PvP fights are also available in arenas (in four-person teams). Players compete here in various disciplines, using the ready-made heroes imposed on them.