Get Destroy All Humans! absolutely for free!

Destroy All Humans! is a complete remake of a very humorous action game. Its first edition premiered in 2005 and has met with great sympathy from the players. In the game we take on the role of a funny alien named Crypto, whose goal is to sow destruction on our planet. It takes place in the middle of the 20th century. The gameplay has a cheerful character. The game has been visually exaggerated. It was decided to keep the original part’s pattern, but it was supplemented with modern effects that were not possible to obtain in 2005. 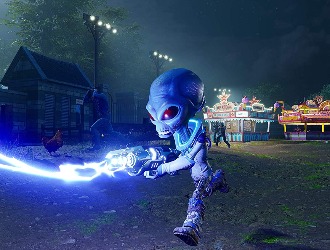 Destroy All Humans! is a complete remake of the humorous action game, which premiered in 2005.

The player takes on the role of an alien called Crypto, who is wreaking destruction on our planet in the mid-twentieth century. The game has a cheerful character, and its graphic design is heavily exaggerated. The original style was retained, but it was enriched with effects that were impossible to achieve in 2005.

If you want to know the fate of this funny alien, exchange Soul Gems for the Destroy All Humans! award just now!