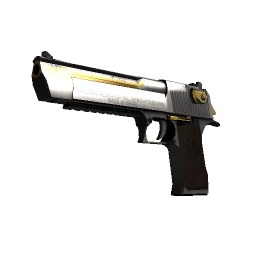 The Desert Eagle is a semi-automatic pistol that fires powerful .50 AE ammunition. It's a fairly large gun and features a very high recoil. However, thanks to its high stopping power and accuracy at long range, it can be used effectively in medium-range combat. It has been painted using a hydrographic of a stylized pilot's helmet. The most famous and one of the most powerful pistols in the world is a Desert Eagle. Its use is not only limited to gamers – it is also used by real professionals – military personnel and police officers. It's easily recognizable thanks to its unusual shape and massive size. The Desert Eagle Pilot is a special edition created as a result of cooperation between Gamehag and the Polish division of the company Kaspersky Lab. This pistol has been painted with a desert camouflage pattern, which was used during the operations in Iraq and Afghanistan. It is still used by many soldiers and is also very popular among collectors. Kaspersky Lab decided to create this skin as part of the contest "Digital Arsenal". The author of the winning idea was Tomasz "Lefman" Lefman from Wroclaw, who won an NVIDIA