Get CZ75-Auto | Polymer absolutely for free! 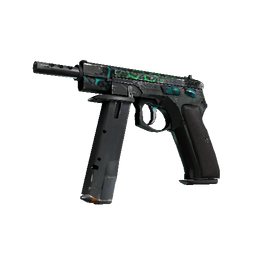 The CZ75-Auto is a semi-automatic pistol firing the 9mm Parabellum round. It feeds from 12-round magazines, and is notable for being the only weapon to feature a detachable magazine in the pistol class. The CZ75-Auto was added to the game on the 6th of March, 2013, alongside the release of the Arms Deal update. The model of this pistol was created by the same man who designed the gun for Counter Strike Source. The CZ75-Auto has a 17 round magazine, which is smaller than that of the CZ75. It is known for its great recoil control and high fire rate. This pistol has been painted using a polymer coat. Exchange your Soul Gems for the CZ75-Auto | Polymer.