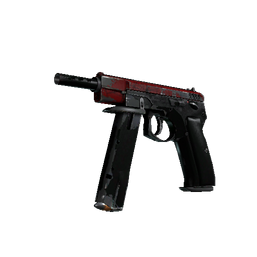 In 2012 Valve has released the next part of the Counter-Strike series. Counter-Strike Global Offensive once again allows us to become a member of one of two teams in multiplayer skirmishes. CS: GO has become one of the main reasons for such a powerful development of modern e-sport.

Fully automatic, great on short distance - this version of the CZ75 allows you to change the fate of the fight and get the opponent's weapon really fast. Due to the low clip capacity it requires accurate shots and keeping an eye on the number of bullets. The weapon was painted red and a hydrographics spider web pattern was applied to it.

Exchange your Soul Gems for the CZ75-Auto Crimson Web.