Get Black the Fall absolutely for free!

Industrial dystopia, all-embracing communism and oppressed people who obediently obeyed a dangerous regime. All people work to breathlessness and endanger their health in large machine factories. At some point, the huge door to one of these factories is destroyed and opens. Many do not notice this fact and are afraid to seize the opportunity fearing the terrifying, oppressive power. However, there is one man - Black - who decides to take advantage of the opportunity to regain his lost freedom.

Black the Fall is an adventure game full of logical and platform elements. This story kept in an atmosphere of dystopia quickly gained the favor of gamers all around the world! 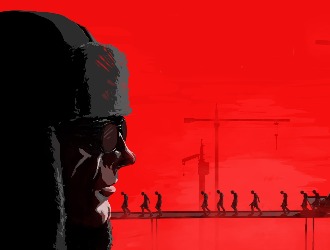 Black the Fall is an interesting action adventure game with logical and platform elements. It was released in 2017 on PCs and Sony, Microsoft and Nintendo consoles of the then-current generation. The game is created by the independent Sand Sailor Studio, while it was released by the popular Square-Enix.

Soon after the premiere, the title received positive reviews among fans of arcade and platform games. In addition to thrilling mechanics, the title interested players in an exciting plot set in the world of communist dystopia.

If you would like to feel the atmosphere of the communist regime in the world of machines, exchange your Soul Gems for the free version of Black the Fall!