Get AUG | Chameleon absolutely for free! 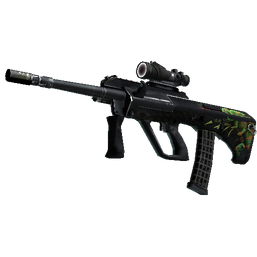 The AUG is a self-loading rifle that has been in service with the armies of many countries since the 1980s. The rifle uses 5.56mm bullets and has a 30-round magazine. This weapon is very effective in combat, even at longer distances. It was covered with a chameleon pattern of green, brown and gray colors. Exchange your Soul Gems for the AUG Chameleon! Aug is the main battle rifle used by the members of SEAL Team Six. The rifle has a bipod mounted on it. It has an integrated silencer, which reduces the sound of firing by 30%, and also makes it harder to spot the marksman. The AUG | Chameleon was painted with a camouflage pattern. Exchange your Soul Gems for the AUG | Chameleon.