The Assassin's Creed series can be safely called the favorite child of the Ubisoft studio from France - an enterprise that has been existing and publishing games continuously since 1986. The first part of the series was released in 2007. In later years the classic and played all over "Ezio Trilogy" appeared. Assassin's Creed, however, did not end with the "trilogy". Continuously, since 2007, almost every year (or even more often), the next full series or add-on is beign released. Thus, in 2020 the series counted more than twenty titles.

Assassin's Creed Valhalla is the thirteenth, full-fledged installment of the series, and the twenty-sixth part of it. The game was almost simultaneously released on all platforms of the modern generation, allowing players to enjoy its completely new version at the same time. Assassin's Creed Valhalla is compared by many to its predecessor - Odyssey - in terms of mechanics, graphic design and the way the story is conducted. This time, however, we move from Ancient Greece to 9th-century England, where the Vikings are looking for a new home. Assassin's Creed Valhalla is very different from the first installments of the series, which have specific and unique stealth and action mechanics. This part, like the previous one, puts on adventure, you can encounter many RPG elements here as well. The title offers players a large, open world that we can traverse both on foot, on the horse, and on board of the ship. Personalization of the character is also possible here, both in terms of appearance and gender - thanks to this, many players can better sink into the adventure. 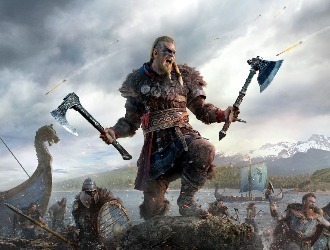 The Assassin's Creed game series has been published continuously since 2007. Every year at least one installment of the series or add-on hits the market, which translated into more than twenty parts of the game existing in 2020. Some of the first parts of Assassin's Creed focused on the adventures of one character - Ezio. In later installments we encounter other new characters. The game mechanics presented in a dozen of parts, which was kept in the style of stealth and action was very specific and unique. In 2018, Ubisoft - the creator of the series - revolutionized Assassin's Creed, focusing on the introduction of adventure and RPG elements.

Assassin's Creed Valhalla was released in 2020 for new generation computers and consoles. This game, in terms of mechanics, style of play and graphic design, strongly brings to mind its predecessor (AC Odyssey). In this part, however, we move to the ninth century, to the north of Europe. We play as the character named Eivor. It also depends on us whether the hero will be a woman or a man and how he or she will look - it is possible to fully personalize the character’s appearance. Eivor is a Norwegian Viking who, together with his/hers clan, came to England in search of a new home. However, no one greets the Vikings with open arms. The island is at war and in a power struggle. At some point, the Vikings must also take part in the conflict.

The game uses mechanics known from Odyssey and several other previous parts of the game. We can traverse the open world, fight, sneak, swim, establish relationships with characters, or choose various dialogue options which have a huge impact on the subsequent development of the story.

If you like interesting RPG action games or you are a huge fan of the Assassin's Creed universe, you must play the latest installment of the series. Exchange your Soul Gems for Assassin's Creed Valhalla and play for free today!