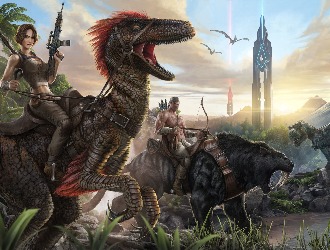 ARK: Survival Evolved is the debut title of the Wildcard studio. This is a sandbox simulator of survival, in which the player has to face the terrifying dinosaurs.

During the struggle with huge prehistoric reptiles, you should focus on the collection of raw materials, creating tools or building hiding places. The mechanics of the game are similar to the zombie MMO known to us, such as DayZ. Our character goes naked and vulnerable to an unfriendly, unknown island, we must do our best to survive there as long as possible.

The key to survival is hunting and collecting raw materials from which we will create weapons and tools (in the craft system). We are constantly developing our character who, while staying on the island, also learns new, practical skills.

In the game there's over 70 species of dinosaurs (pterodactyles, diplodocus, brontosaurs, t-rexy), and if that was not enough, our opponents are also other players, attacking our hideout and stealing supplies.

The action of the game is presented from the perspective of the first person, which additionally allows you to enjoy the beautifu worldl, full of detail, because ARK: Survival Evolved is really exeptional from the graphic side.

Do not wait anymore, grab the key to the ARK game: Survival Evolved for free and start playing!