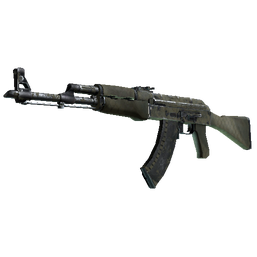 At the end of the 90s, one modification was added to the game called Half-Life. This little modification called Counter-Strike turned into a full-fledged series of first-person shooters, which were mainly intended for online gameplay. The latest version of the series - Counter-Strike: Global Offensive significantly contributed to the development of modern e-sport.

One of the most recognizable rifles in the world is the AK-47. It is a powerful and reliable automatic rifle of Soviet construction. This one was painted with spray paint, using cardboard and grid as a template.

Exchange your Soul Gems for the AK-47 Safari Mesh.