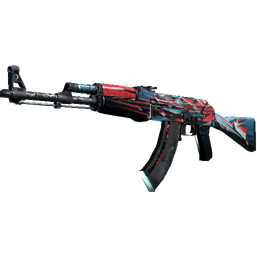 This is a very popular weapon in the world of CS: GO. It has a high rate of fire and a large magazine. The AK-47 | Point Disarray is very accurate, even when fired from the hip. Its low recoil allows you to make precise shots at medium and long range. Exchange for this weapon now! The AK-47 is a rifle that has been in the Counter-Strike series from the beginning. In CSGO it is a powerful weapon, capable of eliminating an opponent in a few hits. As a result, it is one of the most popular weapons in the game. This version of the AK-47 has a blue and white finish with a skull pattern on it. The AK-47 is a reliable and robust assault rifle. It is a symbol of fear for the enemies who face it on the battlefield. However, this does not mean that it is not suitable for close combat. In fact, this weapon has a very short reloading time which makes it ideal for situations when you have to reload during a firefight. This model was created as a result of the community vote on the weapon finishes. This weapon will be available in two colors - black and orange.