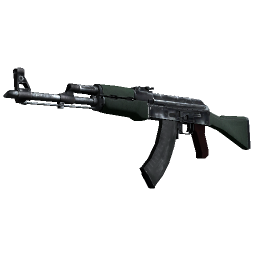 The AK-47 is the most popular assault rifle in the world. It has been used by military forces around the globe for several decades. First Class is an eSports edition of the AK-47 equipped with a silencer. If you are looking for a perfect weapon for your CS:GO avatar, this is it! Exchange your Soul Gems for AK-47 | First Class. The AK-47 is a legendary Soviet rifle, which was originally designed by Mikhail Kalashnikov. It is a gas-operated, rotating bolt rifle. Its main features are the large damage and firing rate, that allows to use it in a full auto mode. The only disadvantage of the weapon was its poor accuracy. This version of the AK-47 was painted with a digital camouflage pattern. Exchange your Soul Gems for the AK-47 | First Class . The AK-47 with a silencer is a very efficient weapon. It is a good choice for medium and long distances. It has a higher rate of fire compared to most other weapons in its class. The most attractive feature is the price. It's cheap, you can buy it in the beginning of the game and it will not cost much to repair it when damaged. This model is painted in the style of the French Foreign Legion. Exchange your Soul Gems for AK-47 First Class.