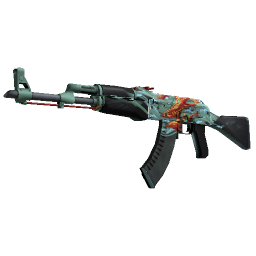 The AK-47 is a legendary weapon that can be used in various situations and environments. It has a very large reserve of ammunition and high accuracy of shooting, which makes it very popular among players. The skin was created with the help of an aquamarine color and then decorated with blue details. Exchange your Soul Gems for the AK-47 Aquamarine Revenge. The AK-47 is a compact assault rifle that has been in use for over 60 years. It's a weapon that is relatively lightweight, but very durable and reliable. The Aquamarine Revenge skin is a unique CS:GO weapon skin that will add a touch of blue to your AK-47. Counter-Strike: Global Offensive is a tactical first-person shooter. The Internet has become a meeting place for terrorists, so the best way to fight them is to have a trained team of dedicated players. The AK-47 is a legendary weapon that first appeared in CounterStrike 1.6 and became a symbol of the first CS game. It was made from a simple sheet of metal and wood, which was not easy to distinguish from its real counterparts. Exchange your Soul Gems for the AK-47 Aquamarine Revenge.