From my childhood I had a contact with WWE. Starting at Mega Drive. Soon after that this happened to the PS2, 360 and now we come to the current generation with WWE 2K18. However, my interest in the sport since then has been falling. If I used to go with my favorite Superstars regularly, today it's not like that anymore.

The sport has evolved over time and the stars I admired have retired, or are with roles far from the action in the ring. Although my interest in the sport dropped quite a bit, that was not enough to not make me excited about the opportunity to control the Wrestlers who shaped my childhood again.

The 2K is synonymous with graphic quality. In WWE 2K18 could not be different. I confess that at first I was a bit skeptical about the game, but it was only Edge's Theme Song echoing around the arena and I saw the graphic quality that 2K put into his game. This same quality we see in the other entries. I point out here Triple H and Undertaker who ripped me a WOW of how close they are to reality. It was like I was tuned into a live broadcast. This same quality is seen at the time of the fight. You can see the wrestlers grimacing and the sweat standing out with the light.

"You can see the wrestlers grimacing and the sweat standing out with the light."

At first you may have difficulties with the controls and the game does not support PT-BR to assist you. Therefore, you will have to rely on patience to learn how to play. Patience this will also be necessary at the time of the fight. The game does not provide you with a button to raise, leaving you at the mercy of hitting the Reversal timing so you can get back on the action. On the one hand, this is good since the animations of the fighters suffering with certain blows made my experience even more immersive. However, there are times when this system shows a certain inconsistency. It sounds like you got the timing right, but the game insists that you pressed early, or too late.

Becoming a Superstar is tedious 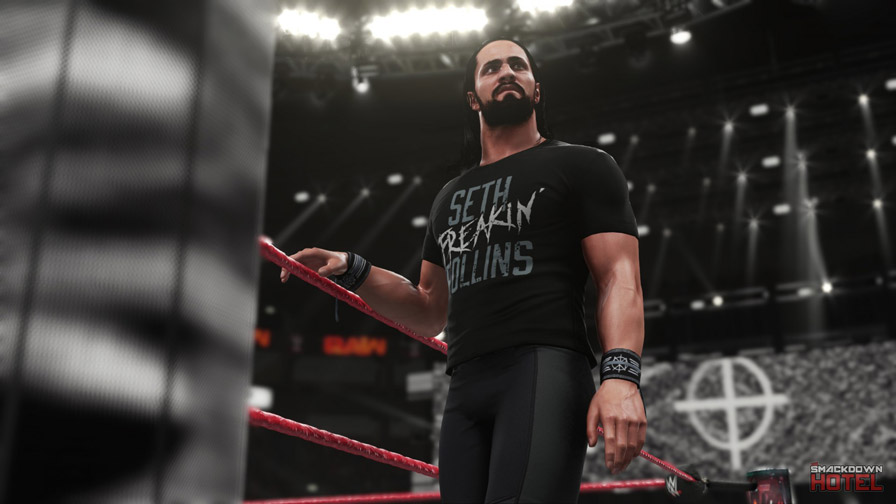 MyCareer from WWE 2K18 did not captivate me. The story is very choppy and repetitive. You are "loose" by Backstage and are talking to the Superstars and getting their fights. However, the story surrounding his Superstar is not well told. There is not a cutscene simulating something that happens in the WWE world as I've seen in other older games in the series.

In my experience with Career Mode I was hoping for something more exciting to happen, but there was nothing to get me off the couch with emotion. You're simply backstage, out into the ring, back out of the arena. Basically, Career Mode boils down to this. In the meantime you have some rivalry. However, you will not distance yourself from what I said above. You can talk to the Superstars backstage, but do not expect them to have something explaining who is who, you will have to go in luck and see if that is who you need to talk to.

"You're just backstage, go out into the ring, back out of the arena. Basically Career Mode comes down to that. "

There is also the Road to Glory mode that comes down to online matches. However, unfortunately I could not test it as I could not find any matches at different times. Speaking in online mode, it is not something that will draw much your attention, since inside it there is something very different to be done besides simply to fight. I think the multiplayer trump was in Road to Glory, but it seems like no one took a lot of interest in it.

But what about the other WWE modes 2K18? 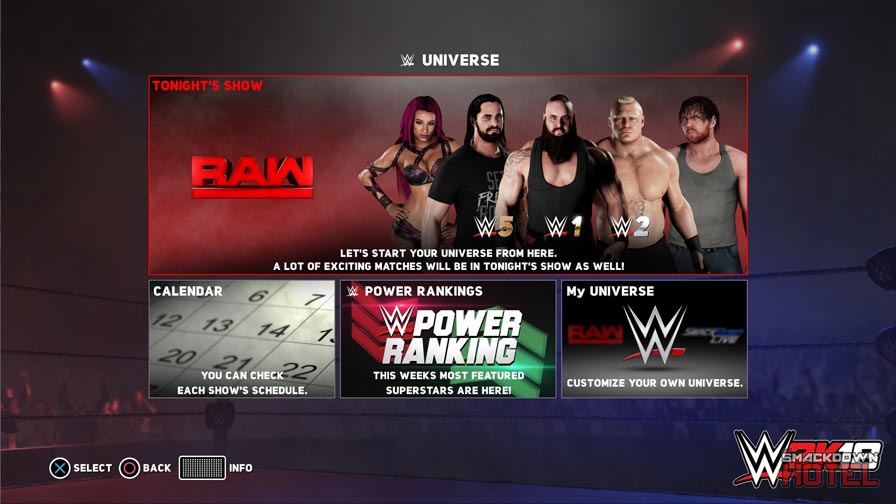 Well, we've already seen that My Career did not look pretty. The other modes are based on the normal fights we see within the WWE world. If you become familiar with this world, you will not see anything different. There were two modes in WWE 2K18 that caught my attention: The WWE Universe and the WWE Community Creations. The first you are inside the WWE world and you are fighting for the shows, building rivalries and changing champions. It reminded me a lot of a simulation game that I played on the computer.

However, it has its limitations. The first is that when building a rivalry, you can only choose between Single or Tag Team. In case you want to make a rivalry between 3 or more Superstars you have to abandon the idea. Another point is that the mode could bring more features like watching how your show is performing before the public. Unfortunately, Promo options are also very limited. It's an interesting feature, but it could be better worked on.

"You will lose a few hours in this mode seeing how creative the other players can be, as well as talented."

In the second mode - WWE Community Creations - you have access to everything that other players have created with WWE Creations. You will lose a few hours in this mode seeing how creative the other players can be, as well as talented. The mode provides characters, arenas, shows and images to be downloaded for use in both game modes and for your own creation.

Artificial intelligence is not so smart. 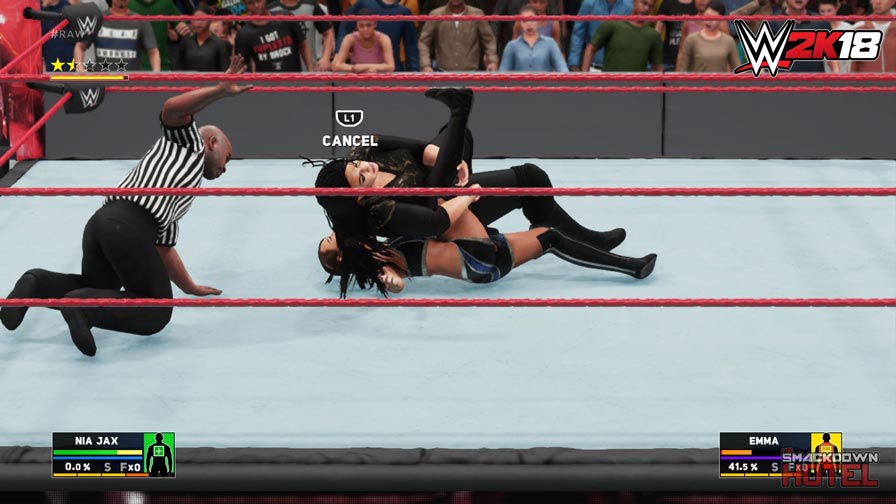 Couple what was quoted in the first paragraph about Reversals to the fact that, sometimes, the artificial intelligence bugar and the computer simply keep moving to and fro. Several times I had to count on the patience and wait for the good will of the computer to try a Reversal and get back to the fight. The judges also stop wanting to be almost always close to the action, or ignoring that there is a Pin and need to start the count.

"Several times I had to count on the patience and wait for the good will of the computer to try a Reversal and get back to the fight."

Another point that bothered me a lot is Tag Team Match. When an opposing team Pin occurs, your partner sometimes ignores it and is still standing there. We know that this is not what happens in WWE doubles matches, so the game has failed to reproduce this in a few moments.

Attention to detail, but not all of them. 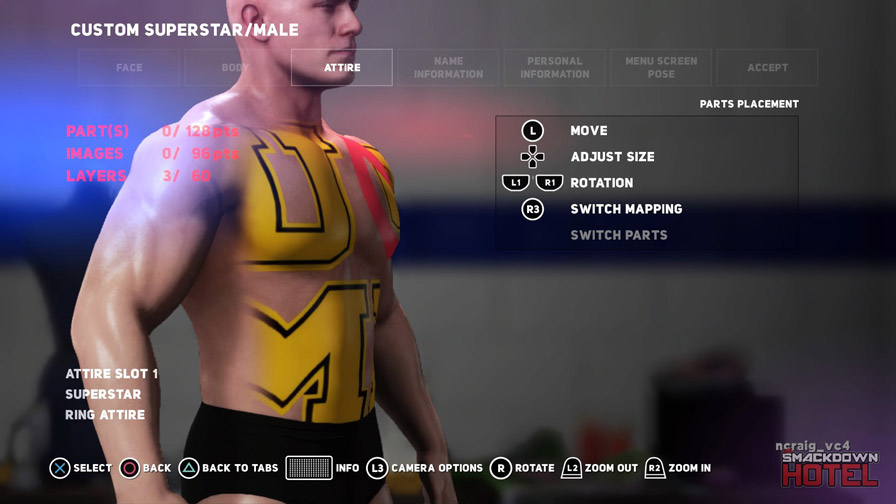 It is undeniable that WWE 2K18 has a lot of attention to detail. Fighters grimacing throughout the fight. Their chests reacting to the covers. The sweat. Everything is minimally detailed so that your experience is as immersive as possible. However, not all things have been very well reproduced. The commentators mysteriously are not in their due posts at certain times, but their voices are there.

Talking about the comments. They are inaccurate at times. There are times when they can pass on the excitement that the fight demands when the fighter executes a Finisher. At other times, however, the narrator simply ignores what is happening in the struggle, or narrates backwards. Another thing is the frame rate. In several moments of the game the framerate falls leaving the action very slow. Expect this especially in 8-Man Match. Mode has been added in this issue and unfortunately does not make it pretty.

The physics of the game is something a little fickle. At certain times it works very well. On the other hand, it causes some embarrassing moments. There were hours a fighter stood in mid-air. Others in which I was executing a coup and was interrupted, but the other Superstar who suffered the coup continued to act as if the action continued to take place. The strings in certain moments react well, but in others they arrest your arm and the reaction caused by this is not the best.

WWE 2K18 makes handsome but slips into the details. It would not be an exaggeration to say that this is a game full of "mas". The fights are beautiful and well choreographed. However, controls are not easy to master. The sound of the game is good, but the soundtrack becomes repetitive after a few hours of Gameplay. The physics of the game is somewhat fickle. There are moments that it will react very well, while others will feel a little embarrassed by what is happening.

Finally, you have to keep in mind the mistakes that the game presents that did not hurt your experience much, but make it less immersive. The game is good to play on a weekend, or gather other friends who have the same taste for wrestling as you, but it will not be the kind of game you can play for a long time.

NEGATIVE POINTS
- Physics of the game has some flaws;
- Some details were not well maintained;
- Frames rate drops in a few moments;
- Career mode is quite repetitive;
- Controls are difficult and confusing.
- Lack of PT-BR support;
- Lack of more varieties of modes.

Verdict
WWE 2K18 shows up a good game for those who are fans of the series. Even so, it is full of mistakes that can limit your experience. I think the main thing is the lack of a more immersive Career Mode. The Frames rate drops as the number of fighters increases in the game. You will not see many things to be done in the game that may hold you for too long. So, WWE 2K18 is an interesting game, but it's not the kind of game that will catch the eye of anyone who is not a fan of the sport, and whoever is a fan will not be drawn to the game for long.

not really a fan of wwe games but great article :D