The story is about alternative history, Victorian London and the order of the knights who gathered King Arthur to protect mankind from the monster, but also the story Ready at Dawn tells you in his new game, otherwise the third-person shooter, at all costs - well even when this price includes gameplay.

And no, under that I do not think that the gameplay is bad, but simply pushed it into the other, while the priority was given to cut-scene animations, occasionally squeezed by quick time sequences. It is almost like it is a movie and not a game. But let's start with some order - when the game has already emphasized the story and its presentation, it would be a good start to start with a review of them.

The Order: 1886 puts you in the role of Sir Galahad, a member of the special order of the knights, who save centuries of humanity from the race of half breed monsters  occasionally helping her Majesty in maintaining order and peace in London. And as the British capital in The Order universe hit the autumn of 1886 and the attacks of insects and rioting caused by certain rebels, the hands of the Knights of the Round Table in this game will be full of work. Add to this also Nikola Tesla who will make for our knights new weapons and gadgets, and you will get all the necessary ingredients for an interesting premise and very good atmosphere. 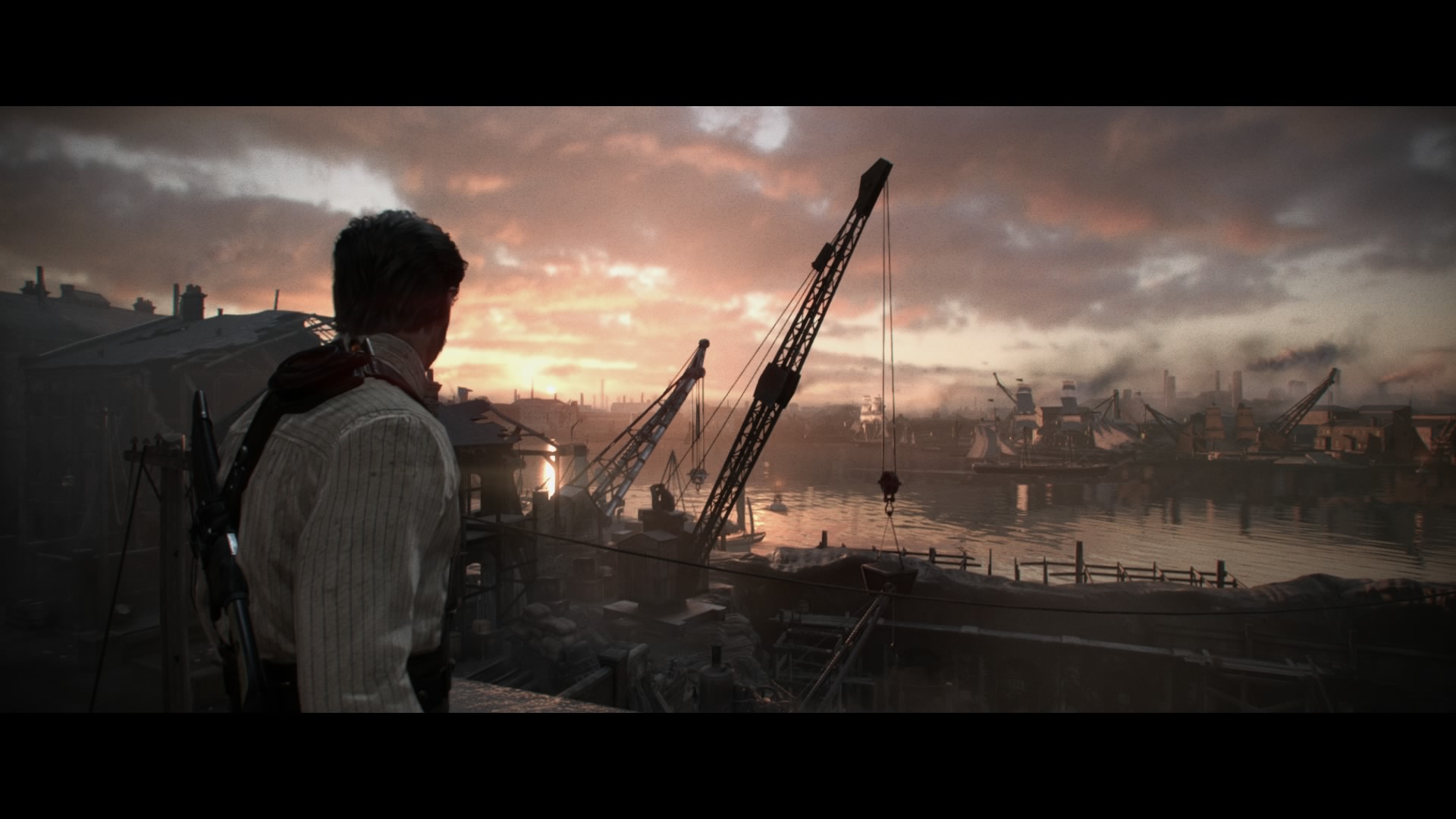 The main plot will follow only somewhere in the middle of the game, when the main character will bring some menu of unclear decisions, after which there will be a couple of predictable reversals (as always, traitors are easy to recognize as soon as you see them faces, despite your hopes maybe this time you will not strike a knife in the back when you expect it most), to end the game in the end as a pilot episode of a series. To be understood, it's not a gigantic cliffhanger, it's a clear feeling that you just saw the beginning of a larger story, which will become something even bigger, better and more interesting in the next episodes.

As I said, the game will present you with all of this through countless cut-scene animations, and your intention to tell you the story first and then honoring you with the gameplay, Ready at Dawn will best prove by the structure and pace of the game. Namely, several chapters in the game are purely animations, while several other chapters will combine animations with interactive sections in which you will simply walk. The pace of the game is therefore very weird, because the action chapters are followed by long periods of time in which you do not do anything other than watching animations and walking around, and then follow, for example, one stealth mission, followed by another bunch of animations.

Of course, somebody might like this, of course, games may and should have their own pace (even if it was a constant action like Call of Duty), but I can not afford to think that the tempo that adorns The Order: 1886 away from the one offered by The Last of Us, which also had a number of slower segments and cut-scenes, but also made them better integrated into a single unit. 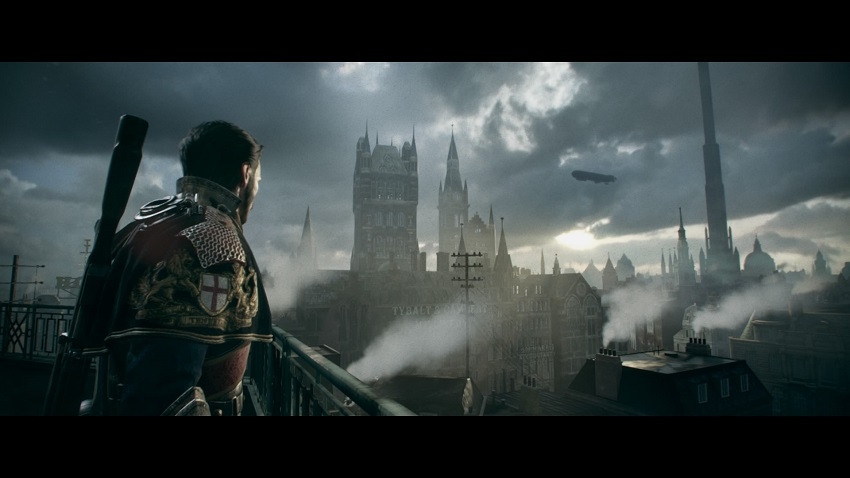 If nothing, the audiovisual presentation of these animations and stories is at a level that you do not really see every day - when I wrote "Movie" in the introduction, I really thought it, because Ready at Dawn subordinated everything precisely. Starting from 2.40: 1 film ratio of the image with black strips at the bottom and top (do not worry, you will not notice them after a few minutes), through directing, photography and framing, to acting and soundtrack, The Order: 1886 looks and sounds like CGI film.

That's also what contributes to graphics that, in a word, are incredible - both artistic and technical. Models of characters, their uniforms, blond hair, interiors full of details, exterior of the Victorian London, detailed textures on every corner, photorealistic lighting, in this game everything looks just fantastic and during the game I was able to catch myself at times in thinking I really "play" what kind of CGI movie.

If we ignore the aforementioned slower sections in which you will only walk through the levels, the core of the The Order: 1886 gameplay will make a third-person bounce-and more than a solid puncture, which is why pushing it into the next plan is actually the biggest problem of the game. 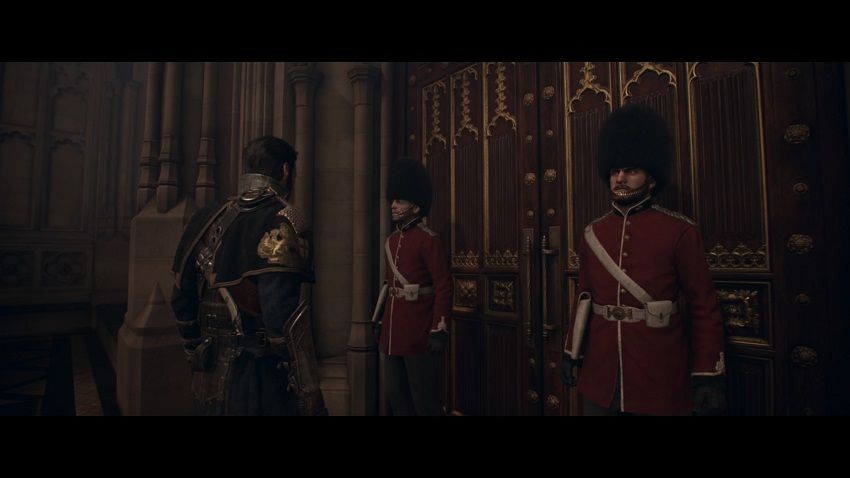 Feedback that offers weapons is great, especially when you have some of the more interesting arsenal items such as Arc Gun or Thermite Rifle in your hands. This first will require a few seconds to charge before firing his "lightning", which will counter the opponents with the ground, while the Thermite Rifle will be the ideal solution for hiding opponents - you will first fire a cloud of flammable substance above them, and then fire it on an alternative mode of fire.

Of the other weapons, it is worth pointing to the shotgun, which also offers fantastic feedback and opponents usually leave it cracked, while the remaining weapons are reduced to a standard combination of pistols, grenade launchers, automatic rifles and snipers. True, it would be nice if the game would offer more imaginative weapons such as Thermite Rifle and Arc Gun, and less classic pistols and machine guns.

There is certainly a greater problem than that of limiting players when selecting and using weapons - I do not necessarily think of a limit on two weapons, because I have already used it (you can carry one gun and one rifle, with two types of bombs), but the frequent inability to choose which weapons I want to place in those two available slots. In other words, when a game wants to use a sniper, and not a Thermite Rifle that you had with your last animation, then you will use a sniper, not a Thermite Rifle. 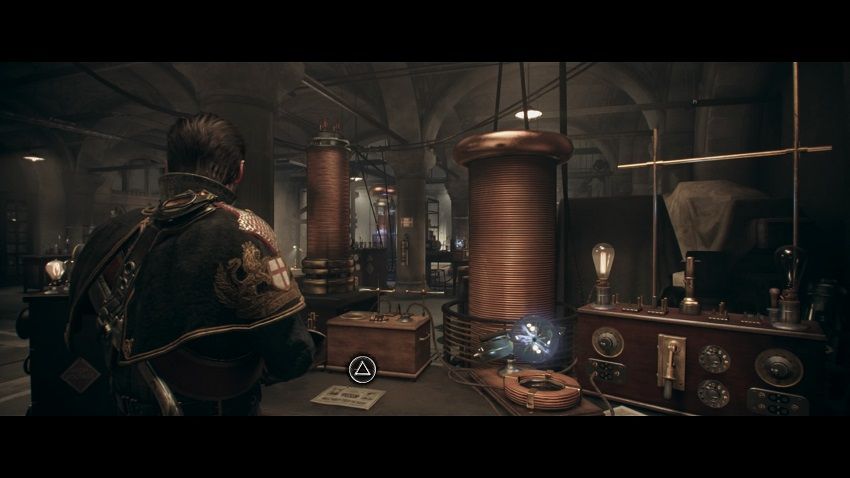 Of course, in the shelter you will wait for your health to restore on your own, although Ready at Dawn here in a good way in the gameplay has incorporated one element of the story - namely, the Knights of the Round Table in The Order can live for centuries thanks to a liquid known as Black Water. And besides offering them a long life, Black Water gives them the option of quick healing, so in the game, sometimes, after you're out of health, you have the option to try to get to the nearest shelf, where you will drink a little Black Water and then return in action.

Black Water is linked to another element of gameplay - a kind of bullet time, which is called Blacksight. You will charge the shot by killing your opponent, and when you activate it, the time will slow down and your character will be able to use an automatic shot in order to deal with a bunch of opponents in a second. And not only that - during Blacksight you will be able to shoot bombs cast by opponents, so its timely activation is more than helpful.

But, on the other hand, the whole game proved to be relatively easy, even with the excluded aim help and the Hard Weight, which took me about 8-10 hours to bring it to an end (consider also that I leveled what I could do more, and that at the first crossing I picked up almost all possible collectibles). 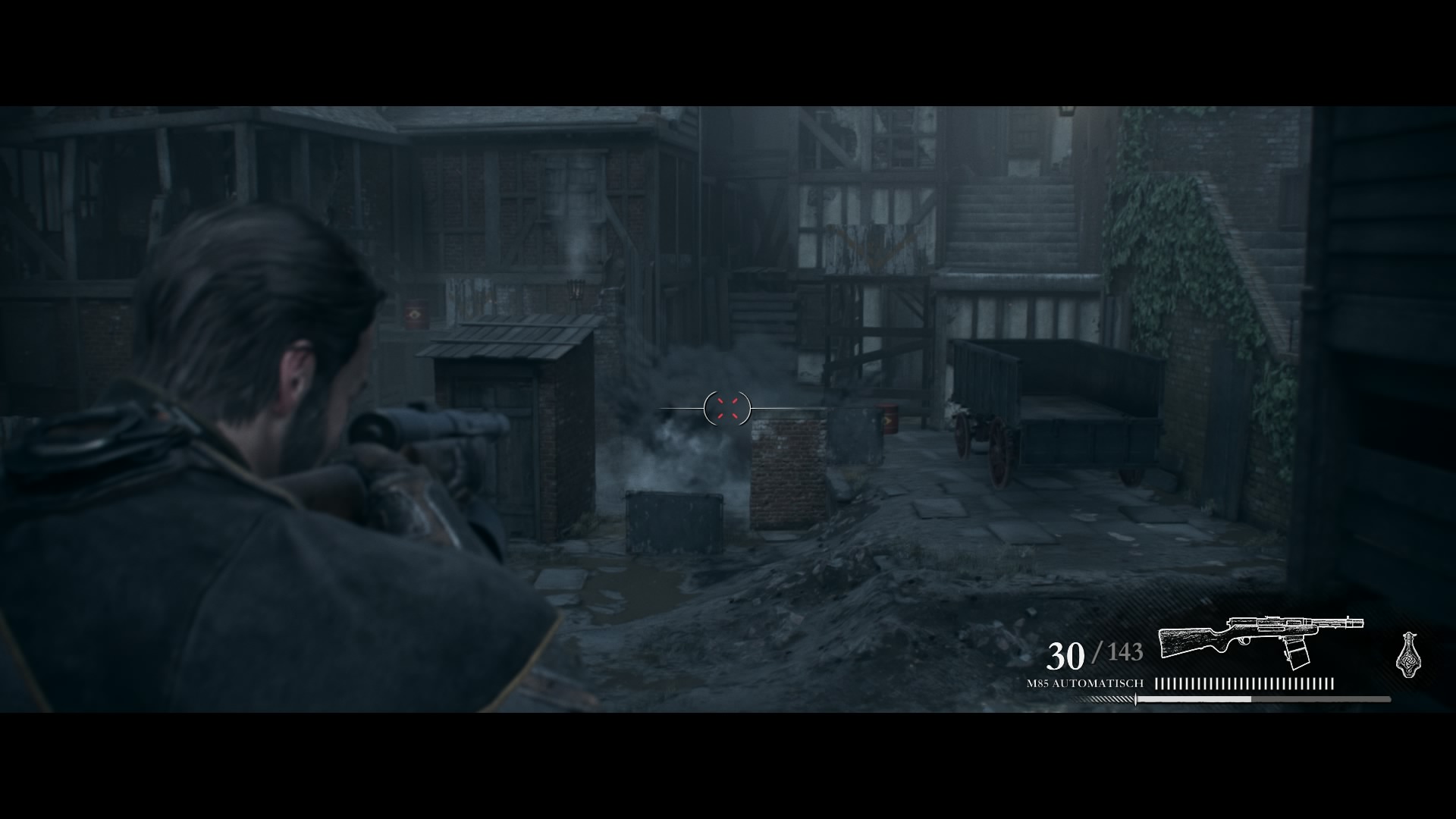 Unfortunately, opponents in The Order will come in just a few variants - like classic dusters and as their somewhat stronger versions with special shields and stronger weapons, which you will not be able to just sort out with a headshot or with several hits in the body. Instead, prepare yourself either to run from shelter to shelter or to use Blacksight, whose usefulness in such situations I discovered quite late (just before the end of the game).

And besides the aforementioned human opponents, in The Order you will also conflict with the wrestlers several times - and, unfortunately, always in almost the same arena. And while the most interesting of these struggles culminated in a sequence that combines a quick time event and a little bit of gameplay freedom in melee attacks, I was especially disappointed by the final boss fight, which turned into an identical combination of quick-time sequences and several melee attacks. 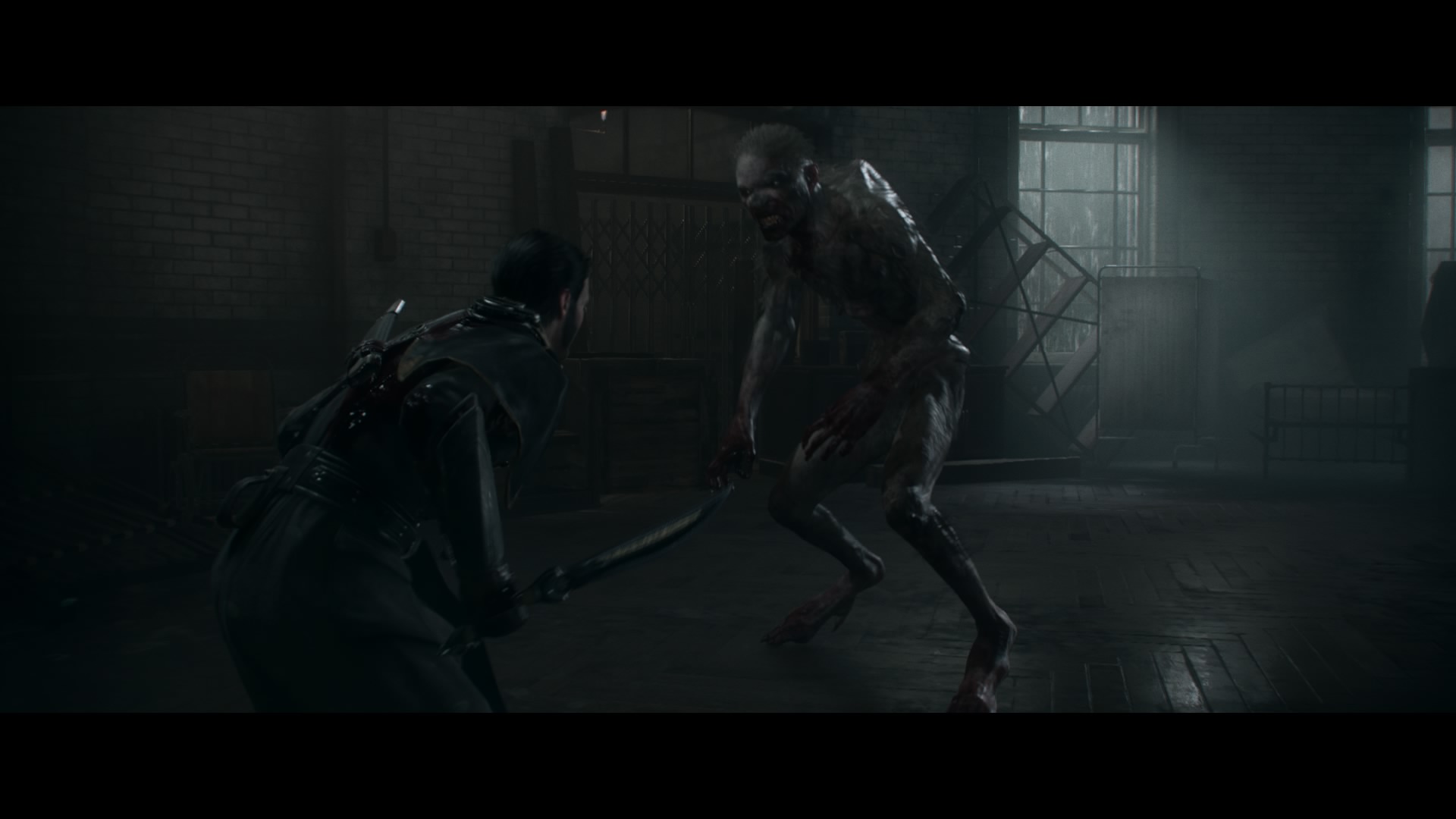 Story, characters and atmosphere are quite interesting, and the gameplay is solid when you already get through to it through numerous animations. But the game is just okay. The animation has too much to do with gameplay (especially in relation to the richness and diversity of gameplay mechanics), while the gameplay itself is pushed too far too far if you ask me.

But, also, if Ready at Dawn gets a chance to make a new sequel, The Order could turn into something much better and more interesting. We just need to offer us more freedom in the gameplay (bigger arena in which we will fight with opponents, more interesting weapons and more types of opponents, and especially supernatural) - and more opportunities to enjoy it.

Great game man thanks for showing me

Interesting article and well-written. I never know about this game until this article came out! Kudos to you.

a little -1 for the pretty long read. Still, looks like a good and in-depth review. Amazing work!

a good trendy article for gamers